About 6 months ago I got engaged. You didn’t know? Well you can read about it here. With any engagement comes the joys and pains of planning a wedding. There is coming up with a budget, creating wedding plans, discussing how many people you want to invite, and everything in between. Just thinking about it is exhausting. Luckily for us, we aren’t getting hitched until next year. So, we have time to save money and iron out the kinks of what is really going to make our day special. 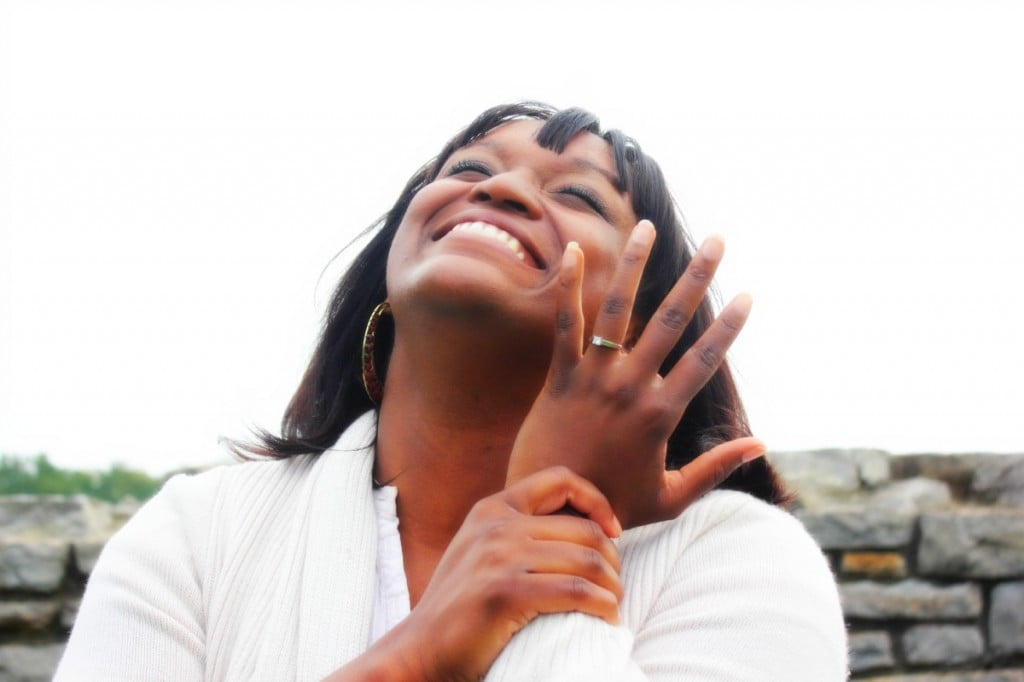 Planning a wedding has been particularly interesting for me because I am not one of those women who had her entire wedding planned out since she was a little girl. I knew more of what I didn’t want, versus what I did want. And when I say things I didn’t want, I mean I know I don’t want an “over-the-top” wedding. I don’t have an extravagant personality, so it wouldn’t make sense for me to plan for an extravagant wedding with 200+ guests, real flower centerpieces, cocktail hours, and picking the most expensive venue that I could find. No. Not me. What I do want is something that is nice, elegant, and simple. That’s it! I know that concept is relative so let me explain. I’m talking DIY centerpieces, buying decorations on sale and clearance, and making my own invitations. Stuff like that. I even considered making my own cupcakes for a split second but that thought didn’t make the cut.

I believe that you can have a classy and wonderful wedding if you do a lot of things yourself. We have been blessed with wonderful friends that are willing to allow us to borrow some of their decorations and their decor ideas that will give our wedding a classy touch without all the cost. I am going to share with you some of the ideas that we are considering and maybe you can use them or give more ideas for me to consider that will keep the cost down. 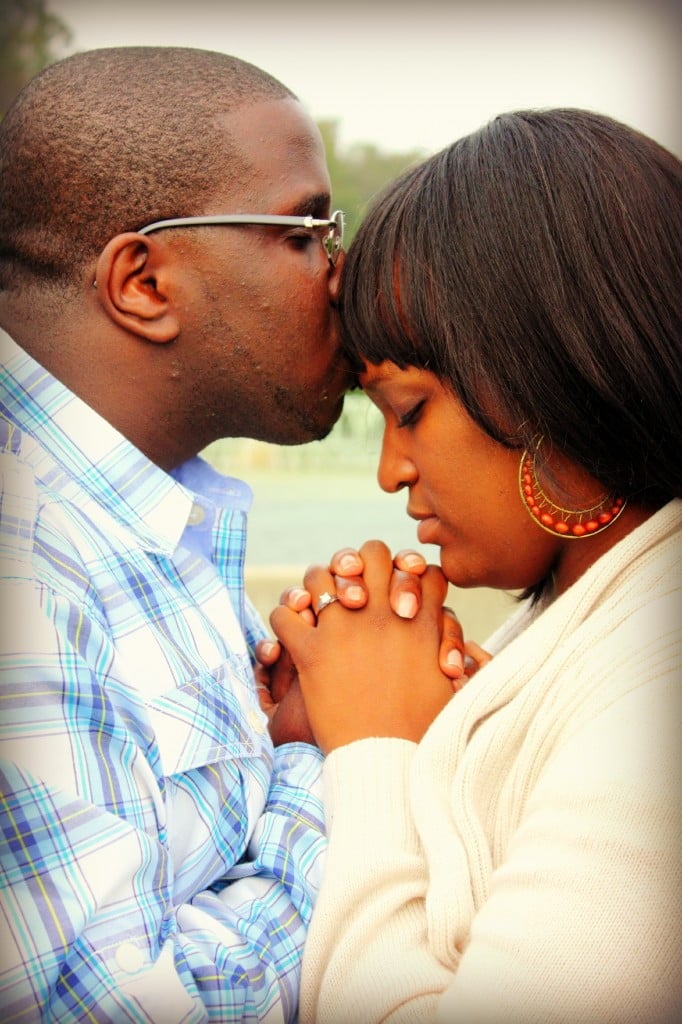 1. Photo Booth– Photo Booths are the newest fad now in the wedding planning world. They are fun to have and a great way to offer favors for your wedding to your guest. However, they can range from $500- $1000. Maybe more! You might be able to cut a deal to get the cost lower but why pay for a photo booth when you can make your own! You heard me. I went to a friends 30th b-day party and she made her very own photo booth by taping mail packing paper as a background and take a large matte cardboard and cut it out to look like a Polaroid, bought facial props, and people took the pictures with their cell phones! Brilliant! It is basically the same idea. Where did she get the idea from? PINTEREST! Pinterest is saving my life now when it comes to cheap and affordable wedding ideas. 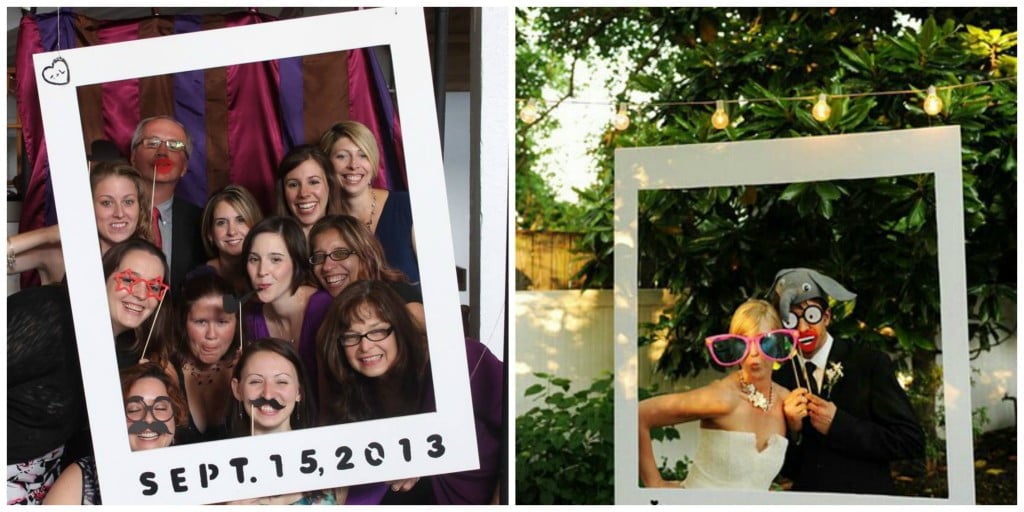 2. Cupcakes vs. Wedding Cake–  My wedding cake is something that I am willing to bend in cost a bit. Why? Because people are going to eat the cake and then its over. However, I do think you should have something nice and pretty, but I don’t think spending a $1000 in a cake is necessary. This is my opinion and my opinion only. Personally, I cannot justify spending more than $500 for a cake that is going to be gone in seconds and people won’t remember all that much. Sure people are going to take pictures of the cake as well as your photographer and it should be nice but it doesn’t have to be pricey. That is why I am entertaining the idea of having cupcakes instead of a cake. You don’t have to worry about cutting the cake and its cheaper! You can go to a local bakery or Wal-Mart or Kroger (they have awesome cupcakes), have them make and decorate the cupcakes in the colors you want, go to Michael’s or a baked good store and buy some cupcake liners that would be easy to cover the cupcake paper to make them look nicer, and buy some cupcake toppers. You can order some nice ones from Etsy. There you go! There are all type of creative ways you can make a cupcake tier. Here is a super cheap and inexpensive way that I found on Pinterest. Also, check out this step-by-step tutorial by Annie Eats on how to make a cupcake stand. 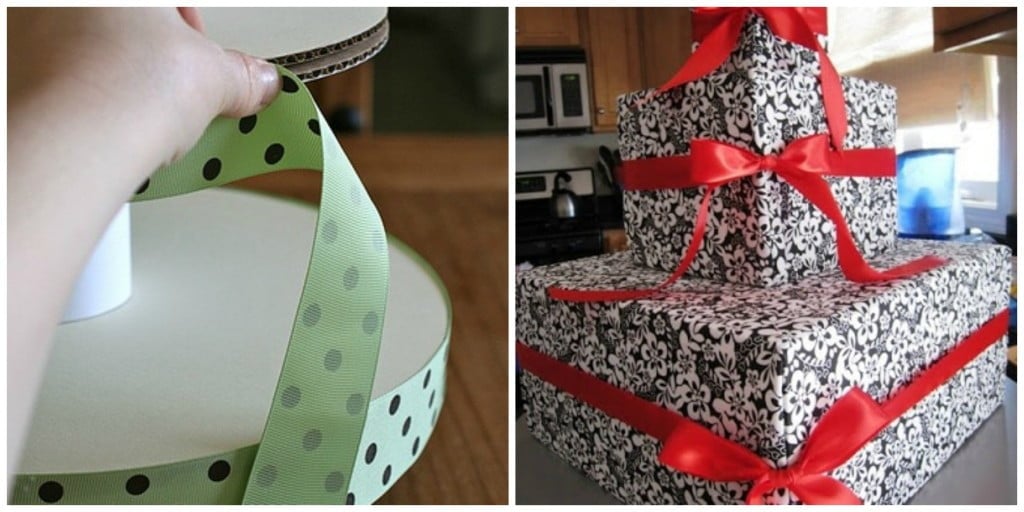 3. Favor Buffets– I know that having a candy bar is a new way that people are having party favors. Personally, I think favors are a waste of money. I have been a bridesmaid in four weddings and I don’t remember the favors at ANY of them. Favors are an after thought. I know it’s a memento for the wedding, but let’s be honest, people lose them, misplace them, and/or throw them away. Even with that logic, I do think it is nice to have something for your guests to take home. I think buffets are a nice touch. You can do candy buffets, popcorn buffets, or even S’more buffets. It all depends on the theme or idea of your wedding. I’m still exploring wedding favor options but as of now, we are entertaining the idea of having a simple candy buffet. The pictures that the guests take will be the favors, right? 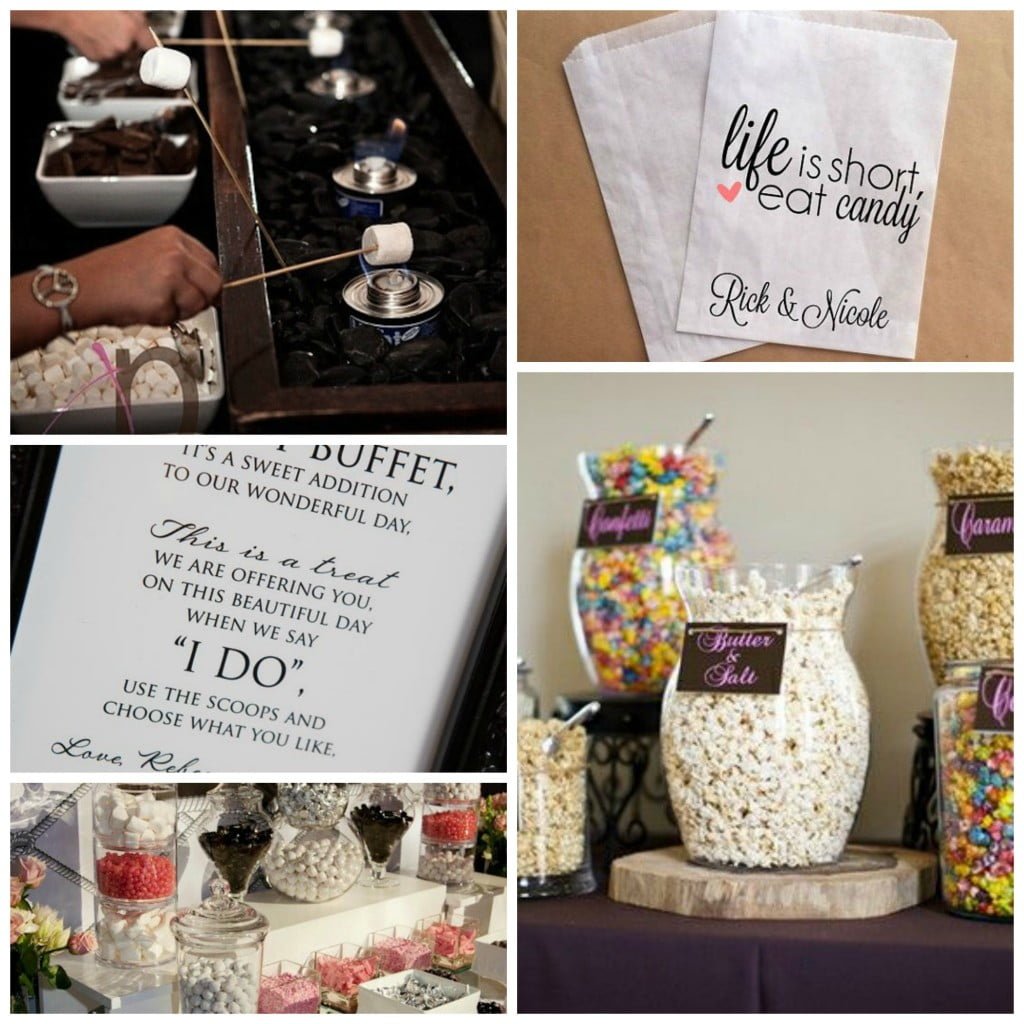 4. Centerpieces: Okay, sure I would love to have nice and pricey centerpieces on the big day. Simply so I don’t have to put them together. What I have learned is that if you make your own centerpieces you can use that as time to spend bonding with your bridesmaids or female relatives of your husband’s family. Plus, when you think about spending more time with the family that kind of makes it worth it, right?Well for me it does. My maid of honor and I have already went to a huge decorating warehouse to get some ideas of the decor that I want to incorporate throughout the wedding and reception and come up with some really classy and affordable ideas. I’ll give you a glimpse of the idea that we are going for. 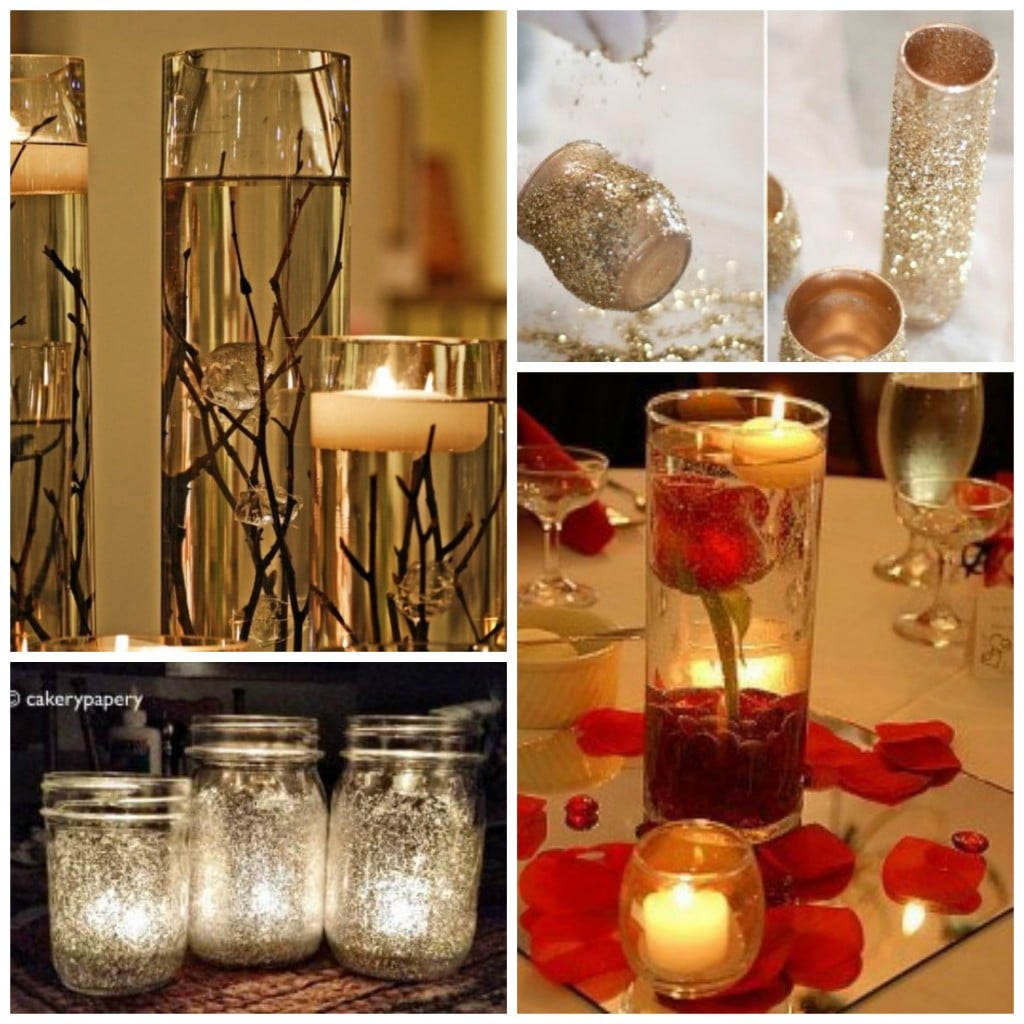 5. Rehearsal Dinner: Now, this is a compromise that I am willing to make. Personally, I don’t know exactly why, but I really would love to have my rehearsal dinner at a nice restaurant. I always have. However, my fiance and I have two very different opinions about its purpose and how to go about it. Therefore, I think this is an area where we both really bent a little. He doesn’t see the need for it as far as us paying for another meal (men) and that is something that I am not willing to let people pay for and want it to be a nice way to say “Thank You” for all of those who are being apart of our special day. Therefore, we have decided to do something informal. We are either going to get pizza from my favorite pizza place, Dewey’s pizza (gourmet pizza); Have someone grill dogs and burgers and get some pasta salads from Sam’s; or order chicken wings from our favorite chicken spot, Roosters. That will keep the cost down but still give us the opportunity to give something to those involved.

All in all, I think we are headed toward the right direction. The great thing about being engaged for two years is that you have time to research and reconsider some of your thoughts about what you wanted to do for your wedding. As annoying as it sometimes is to have to consider someone else’s thought, for me, it has been nice to have that structure to make sure I don’t go over board and to really think about what I choose to put our money into. One thing I think that both partners have to accept when planning a wedding is that you hardly are going to ever agree on the concept, the budget, the purpose, and etc. Unless you are incredibly lucky.

Sometimes I do wish I didn’t want a wedding. I wish I was okay with a “shot-gun” wedding and then go out to a restaurant afterwards and be done with it. I have even tried to convince myself to give myself over to that idea. “Nicole, just get married with your parents, by a dress from Target, and call it a day!” In my heart, that isn’t me. That isn’t what I want. I don’t want a wedding for the attention and I don’t think I have referenced to that day as “My Day” as of yet. You see, both of our families have never seen a classy wedding let alone a wedding at all. Our families, in some instances, have never seen a true example of covenant love. I feel within the depths of my heart that God is using us to show His people what love should look like and at our wedding, hearts and mindsets are going to change. 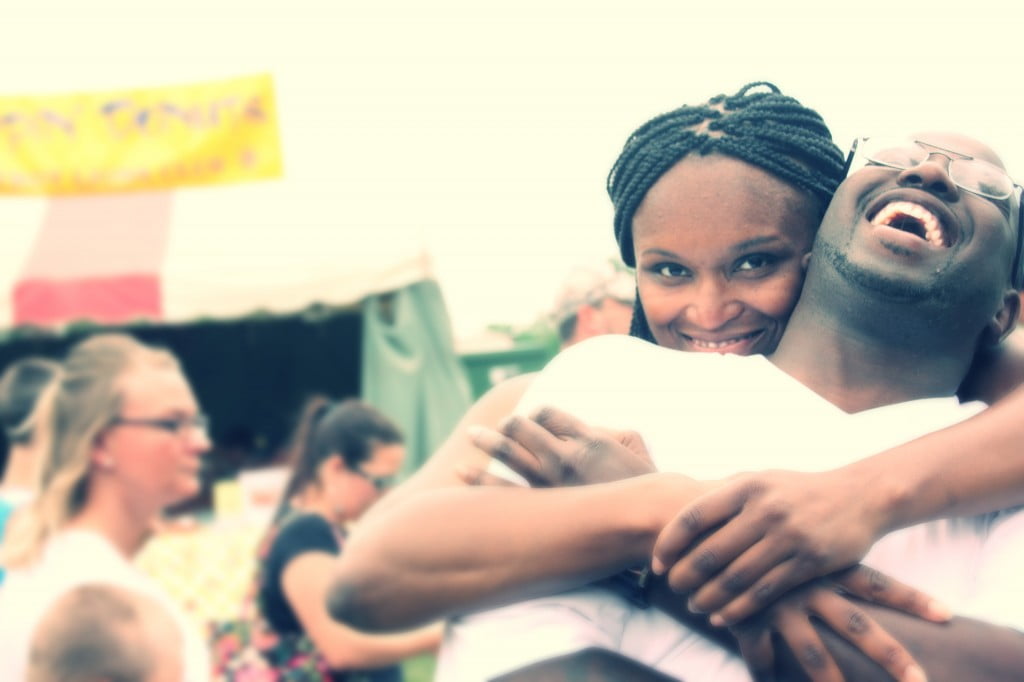 Our nieces and nephews will have an honest example of how to pursue one another in a God honoring way. They will remember they day their aunt and uncle got married and how much in love they were. They may not completely understand what that means, but they will always have that image in their head and go back to it when they find themselves in a bad relationship or consider marriage for themselves. There may be some couples that will attend our wedding who are secretly having marital problems and it is in my belief that with spirit of God that will be graced upon us that day,  will reawaken the passion and the memory about why those couples were married in the first place. The single people who will be there who have lost hope in finding something honest and real, will see the smiles on our faces and think to themselves “I want something like that for me!”  My fiance and I are merely allowing ourselves to be pimped out for God’s will and purpose. A wedding isn’t about the cake, the invitation, and the centerpieces. It’s a day to celebrate love and the fact that two people have now merged as one soul to join God’s kingdom to do His work. That is much to be celebrated. So bring on the food, the smiles, the drinks (non-alcoholic of course), the parties, and all the celebrations because these are things that God wants us to experience and enjoy. It’s about having a “kingdom” mentality to His people and having faith that God will take care of the rest (Thanks for that last thought Charlie :-).

“So I recommend having fun, because there is nothing better for people to do in this world than to eat, drink, and enjoy life. That way they will experience some happiness along with all the hard work God gives them.”