I love all things baked potato. Baked potato chips, baked potato casserole, and baked potato soup! This soup is the perfect weekend comfort food, as long as you don’t mind the calories, and it is very filling. I have had potato leek soup before and it was alright, but nothing beats this soup. To top it off, I added steak chunks to it as well! If you are anything like me, soup is at its best in the winter time or in cold weather. With March just around the corner, you have to hurry and make this soup and let me know what you think. Hurry! 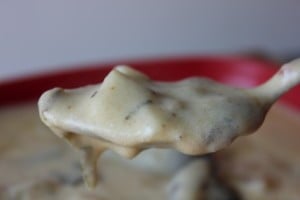 3 large potatoes cubed and peeled (I didn’t peel mine)

Salt and pepper to taste

1.       Place bacon on a baking sheet and place in the oven on 350 degrees until cooked. You can also cook your bacon on the stove if that is easier. Once you bacon is cooked drain, chop, and set aside.

2.       In a large sauce pan, melt the butter. Once it is melted add in the flour little by little whisking throughout the entire process. The mixture will become thick. Gradually stir in milk and whisk constantly until thickened. This will also prevent the soup base from sticking to the pot.

3.       Stir in potatoes and onions and bring to a slight boil while stirring frequently. Milk burns easily if it is not attended to. So you have to keep a watchful eye on your soup so it doesn’t burn.

4.       After 15 minutes, add the bacon, cheese, sour cream, ranch dressing, and salt and pepper and continue to stir on reduced heat.

5.       While the soup is still cooking, begin to pan sear your steak cubes and season them with salt and pepper also. Serve your soup by placing the soup in the bowl and adding some of the steak chunks on top of the soup and serve. 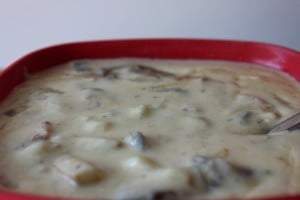