I know that you have missed me cooking and baking. But let me tell you that I have been a pretty busy chic. I’ve been packing, moving, and doing a whole bunch of other stuff that has just been wearing me out. And although I am not able to recall exactly every single thing that has consumed my time lately, I can tell you where I moved! Does anyone want to guess where? I’ve embraced my young single hood and youthful desires to be apart of the “in crowd” and have moved downtown Cincinnati! You know, Over the Rhine! I know what most of you are thinking, “Is it safe?”, “Why would you do that?”, “Do you remember the riots”?  And my answer to those questions are, “No place is safe”, “Because I wanted something different”, and “I do remember the riots that happened TEN years ago”.

For all of you skeptics, I have done a little background of the Over the Rhine area to add some historical context in the text of this text (You liked that didn’t you J?).  Here are some interesting facts that I looked up:

See! Doesn’t this make you more interested in OTR? 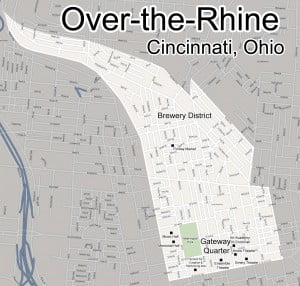 Anyways, after a while, I got tired of living in suburbia where the grass is always green, it is always quite, and the people are to themselves and lame. Living in an urban area, you see different types of people, hear different sounds, and there is hardly any grass. I wanted something that was urban yet beautiful yet historic. Do you see what I mean? And I am in the center of all that! As of today, however, I am not unpacked and I have not really had the opportunity to enjoy it that much, which is also the biggest contributor to my lack of baking and cooking yummy things.

I am a young, sexy, cute, “single like to mingle” type of girl. I plan on taking full advantage of everything that I can get into, that is legal, will not transmit any venereal diseases, will not end my night passed out on a pole of some sort, will not have me waking up next to someone who I don’t know, will not have me waking up in a puddle of my vomit on Vine Street, or anything else that will leave me in compromising situations. Therefore, I have done research and I have created a list of some things that I want to do in the City of Cincinnati. These things will be posted each month and considering that I have and will be pretty busy, I am only giving myself 3 things to do this month. This blog posting is my confirmation that I will do it because I know that you will hold me to it. Right? After I have completed each event on my list, I will post a picture as proof and give you a full report of my experience. Consider me your local foodie with a healthy city life!

Are you ready for my list? I am! Here we go:

2. Findlay Market. YES! I am sure that most of you are ready to unsubscribe to my blog and de-friend me on Facebook, but let me explain. When I first moved to Cincinnati I was 18, an undergraduate student at the University of Cincinnati, and I had no car! Then as time went on I just never went. But I am making it every priority to go.

3. Venice on Vine. I hear this place has really good pizza. Alrighty then! Let the exploring begin. But I guess I should unpack first. Tell me of some places that I should go to in the Over the Rhine area or in Cincinnati in general. I look forward to hearing from you!