For me to be a food blogger, I sure can be a picky eater.

I think I talked about this briefly in a previous post, but for the longest time I did not like French Toast. Why? When I was growing up every time I had French Toast it would taste very eggy. Almost like it sat in the egg wash too long and it wasn’t cooked long enough. I hated French Toast. This could also be attributed to the reason why I still struggle with liking eggs too. Sometimes I like scrambled eggs and sometimes I don’t. I definitely don’t do omelets. I use to like them, but not so much anymore. You can blame my mom for that honestly. Man, I hate to bash my mom and her cooking skills on this blog again, but that woman just can’t cook. Let me rephrase by just saying that she didn’t cook with any love. It was just food. I guess when you have 4 kids and worked crazy hours it’s hard to find time to really put effort into the meals with that type of lifestyle. I guess I’ll give her a pass. However, that still doesn’t disregard the fact that most of her meals scarred me for life. When my mom made pancakes, they were always burnt, when she made chili it was just…gross, she made eggs they were either too runny or too dry, and when she called herself making French Toast she made them on thin pieces of sandwich bread and left them in the batter too long and allowing them to be slightly burnt on the outside but eggy on the inside. Now do you understand why it took me so long to like French Toast?

Since my childhood, I have found a deep appreciation for French Toast and have come to love it. But, it strongly depends on how it is prepared. It has to be made with thick, gourmet like bread. Like a brioche, thick Italian Bread, or something really creative. When I make French Toast (and it isn’t often) I always use a thick bread like the ones I mentioned and I always have some success with it. One thing that I like about French Toast Sticks that makes me fall in love is a topping for my French Toast. What I mean is a coating of some sort like finely chopped pecans or almonds and even a crunchy coating using some sort of cereal. All of the elements that makes me appreciate French Toast is found in this Fried French Toast Sticks Recipe. 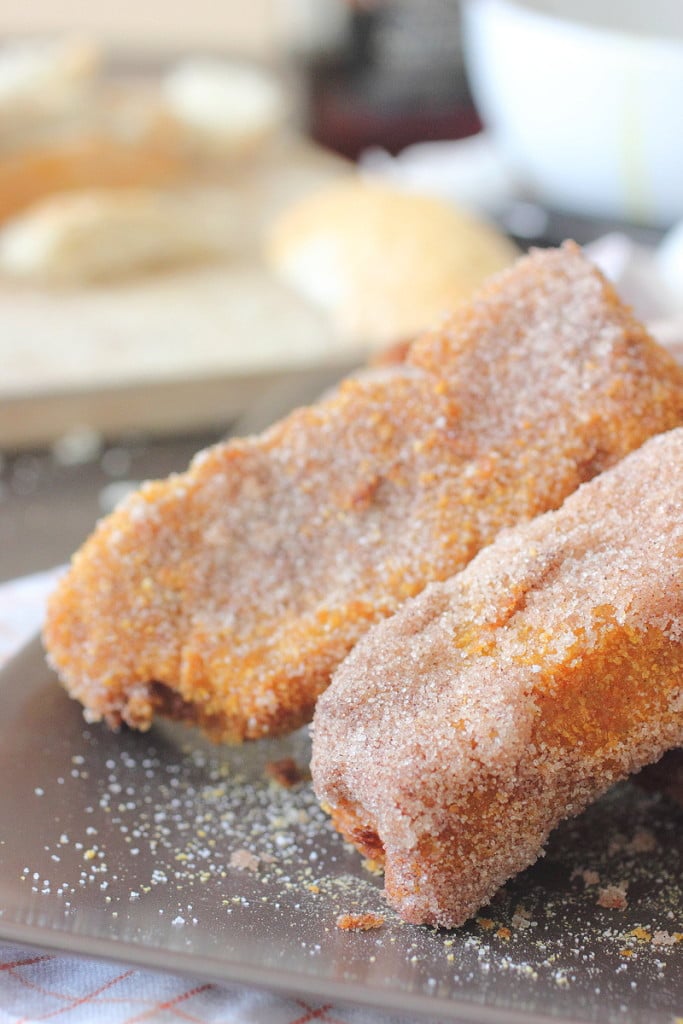 I bought a thick loaf of crusty Country Bread, sliced it into thick slices. What I learned about this is that the slices doesn’t necessarily have to be cut into thick slices as when it is put into the fryer the bread slices will expand and get bigger. Therefore, you can really slice the bread how you want it. You can cut the bread into shapes or use cookie cutters if you are really creative. The coating that I used was crushed Corn Flakes.  Aww man, that takes the French Toast up a notch. It makes the French Toast crunchy and addicting to eat and somewhat fun. Once the French Toast would finish cooking, I tossed them into a cinnamon and sugar mixture that took these Fried French Toast Sticks from “oh me” to “oh my”. My husband loved them but I think I loved them more. Once you try them (and I know you will), let me know what you think! 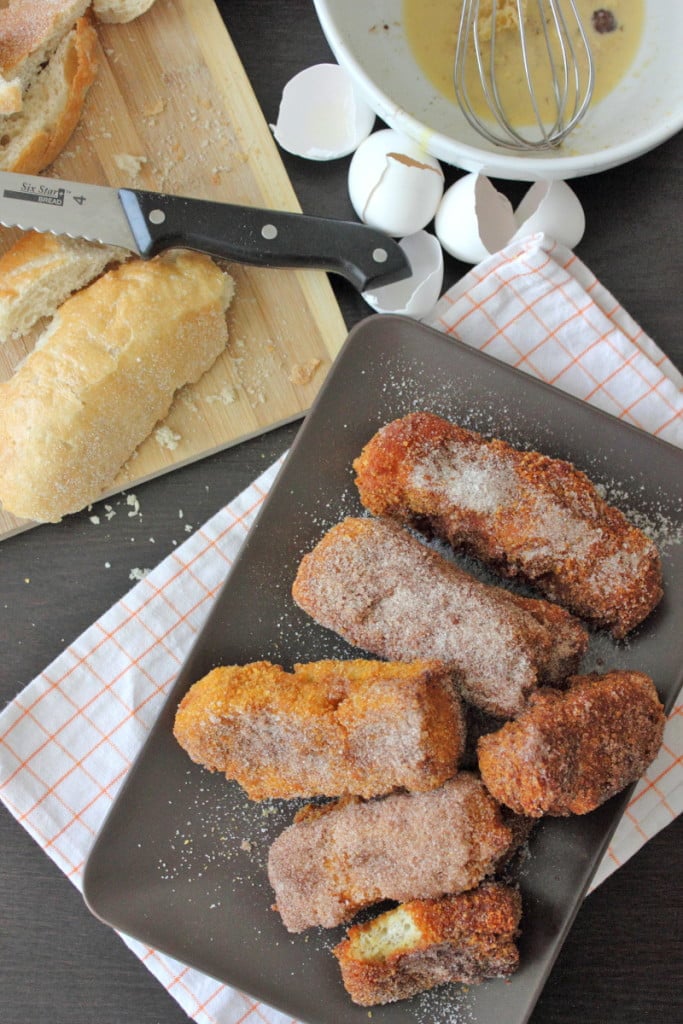