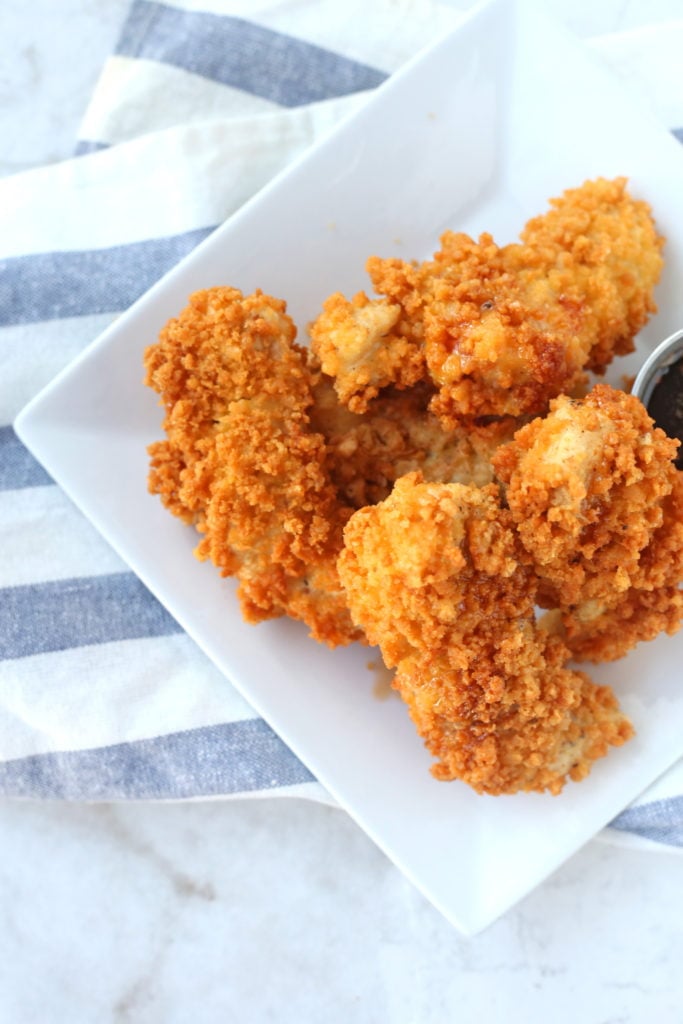 These Waffle Breaded Chicken Tenders are like having Chicken and Waffles in one bite!

How many of you out there love Popeye’s Chicken? I know that most of us are aware of K.F.C (Kentucky Fried Chicken), but that is not what I am talking about. I am talking about Popeye’s Fried Chicken! The other chicken spot that sells the “crack biscuits”. Well that is what my friends and family call their biscuits. Why? Because we believe they put a small dose of crack in those damn biscuits. Otherwise, how in the world are they so addicting. I could go to Popeye’s and order a dozen of their biscuits alone and eat them throughout the day. But if I did that my ass would look like a biscuit. Restraint Nicole. I seriously have a love/hate relationship with Popeye’s! I love how good the food is, but I hate they I can’t eat it more often just because it wouldn’t be good for my general health. But boy do I love their food. 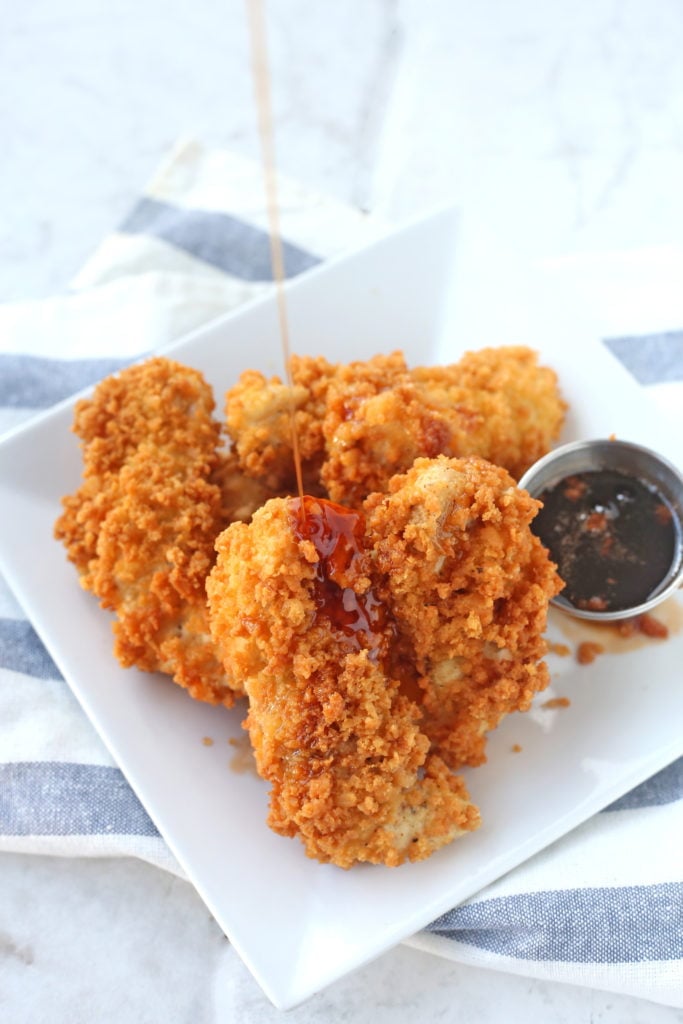 First of, the food is amazing! I love their Spicy Fried Chicken as opposed to their Crispy Fried Chicken. Even the sides are good. They have the basics such as green beans, mashed potatoes, even red beans and rice. However, I have never had a good helping of their macaroni and cheese. I prefer KFC’s macaroni and cheese over Popeye’s to be honest. In fact, I use to think KFC had some pretty amazing biscuits. That was until I had Popeye’s. Okay, enough with the biscuits. I just can’t help but to think about them!  Well, a couple of months ago, I had something new on their menu that change my life forever. I had their Waffle Chicken Tenders and I promise it was like having Chicken and Waffles in one bite. I couldn’t believe how both of the concepts was combined into one bite! Now of course you know what I had to do. I just had to figure out if I could duplicate the same concept myself. I am so curious. 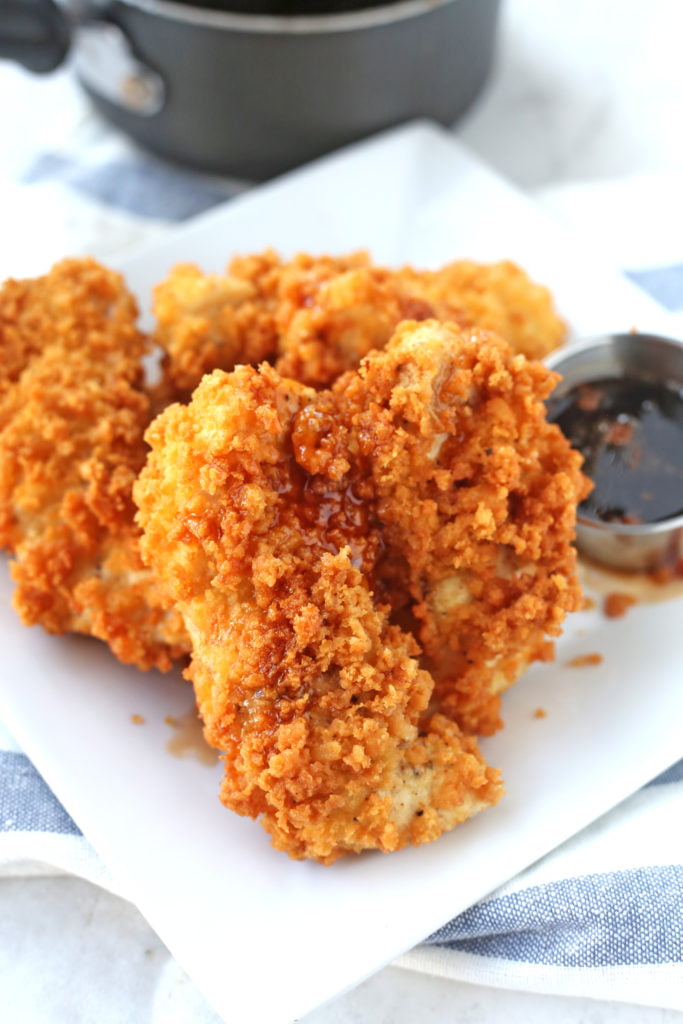 Here is what I did, I bought a box of frozen waffles, chicken tenders strips, and the rest of the ingredients I already had at home, which is what I always try to do when I make recipes to share with you guys, such as flour, buttermilk, and some spices. Also, I did deep fry these and for when I get a question from someone asking if you could bake these instead, let me tell you that you don’t want to because I am willing to bet it won’t taste nearly the same. Therefore, I know there are some of you that are always trying to find healthy alternatives to recipes, but with this one you won’t want to. After I fried these babies up, I just had to make a dipping sauce and you know what that dipping sauce consists of, right? Syrup! Yep, in a pot I mixed together some maple syrup, Bourbon ( I feel like I put Bourbon in everything), hot sauce, and cayenne pepper and drizzle this sauce over my hot chicken tenders. You don’t have to drizzle on top of the chicken tenders. You can totally serve it as a dipping sauce. 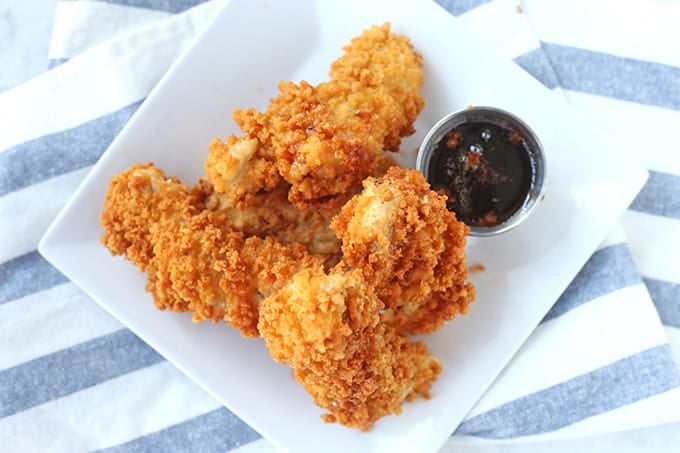 So, how did they taste? Well, my husband came in the kitchen as I was cooking these babies and happened to try one that was already cooked because he is nosey like that, he bit into a Waffle Breaded Chicken Tender and the first thing he said was, “Oh my damn!” I wasn’t sure if that was good or bad because his facial expression looked like he was displeased or they weren’t cooked. With excitement and curiosity, I asked him what he thought. He asked me what they were and  I told him the concept and he said “Hurry up and fry the rest of these! These are good as****”. Excuse his use of colorful language. I jumped up and down filled with excitement and curiosity myself so I tried one and boy was his use of colorful language appropriate in this case. Yes. They were that good! The first thing that hit you is the crunch of these chicken tenders. The breading that comes from the ground waffles gives the tenders a good crunch! You don’t necessarily taste the waffles right away, but once you either dip them in that syrup or drizzle them in the sauce, the waffle flavor comes alive. I am telling you this is THE way to eat chicken tenders! There is no other way to do it! So, go buy what you need to make these because I know you’re curious and come back and tell me how much you love them.

These Waffle Breaded Chicken Tenders is like having Chicken and Waffles in one bite! Serve with hot sauce and maple syrup dipping sauce!