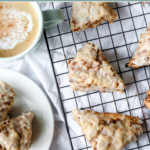 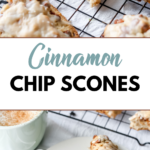 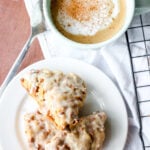 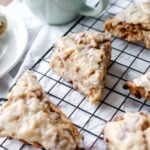 These Cinnamon Chip Scones are crisp on the outside and moist and full of cinnamon flavor on the inside. The scones are made perfectly with a simple glaze and are the perfect addition to any breakfast or brunch gathering.

Many of you are not really into scones because they can taste like a dry biscuit. I used to think the same thing. I can’t recall the first scone I had, but I remember thinking they weren’t as bad as I thought. Sure they look dry and stale, but they taste wonderful. So I thought of some delicious scone flavors to try, and cinnamon was the first thing that came to mind.

Cinnamon Chips are a rare baking ingredient that I have only seen around the fall and winter seasons. When you see them, I recommend buying a few bags that you can use for various baking recipes. Otherwise, there is a way that you can make homemade cinnamon chips as a replacement.

How to make Homemade Cinnamon Chips

Making homemade cinnamon chips is quite simple. All you need are a few simple ingredients:

Once finished, you will allow the chips to cool completely at room temperature. The cinnamon chip sheet will become hard. Finally, use a sharp knife or pizza cutter to cut into small chips.
When you wake up and decide to make this scone recipe for breakfast, you will thank me because your home will smell like one big Cinnamon Chip Yankee Candle.

Can I freeze these scones the day before?

Yes! You can make the dough, cut the scones into triangles, place them on a baking sheet and freeze them for about an hour. Then you can place them in a freezer storage bag for future use.

Can I use a different flavor instead of cinnamon?

Yes! You can use chocolate chips, butterscotch, or even blueberries!

Where can I buy cinnamon chips?

I found them in the grocery store, but you can buy them all year long on Amazon.

Cinnamon Chip Scones will have your entire house smelling like cinnamon and winter. Instead of waking your family up with coffee, bake these scones, and they will come running.