These loaded Potato Skins are double-loaded with bacon, filled with cheddar cheese, and topped off with sour cream! 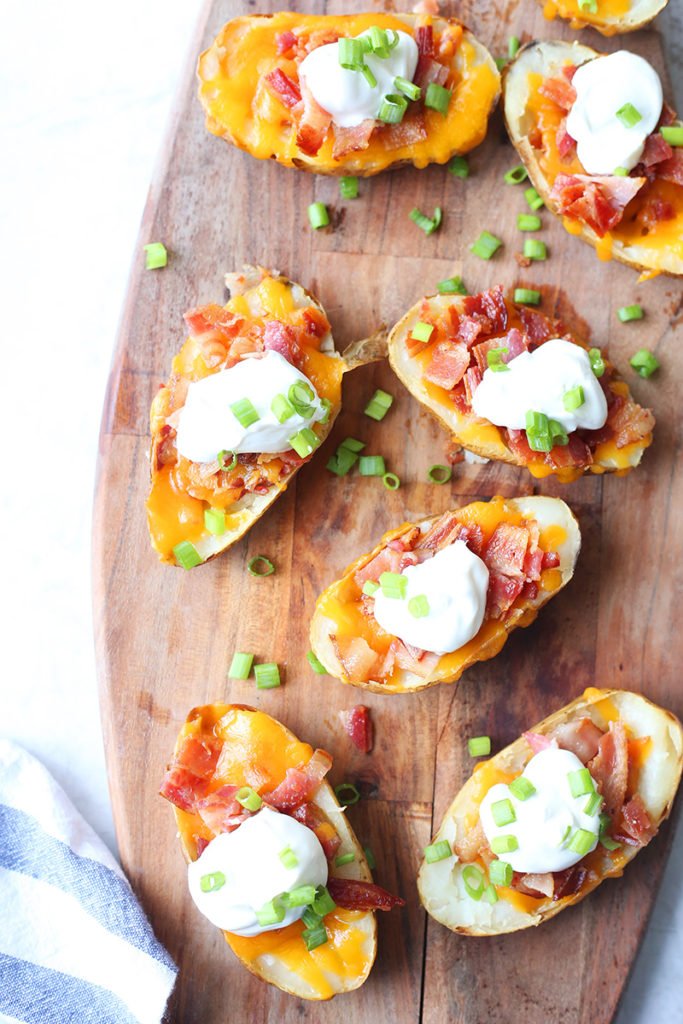 You will never believe how easy and delicious this Loaded Potato Skins Recipe is to make!

One of the many things my husband loves about me is how I am not only smart, beautiful, and a great cook (his words not mine), but he also loves how I can also be one of the guys. Let me explain, I absolutely love bar food and a nice cold one (beer that is). There is nothing that brings me more joy than going to a sports bar that sells awesome appetizers, eating some Boneless Garlic Buffalo Wings, Mozzarella Cheese Sticks, Sliders, some sweet dessert, and wash it all down with an Angry Orchard hard cider or Strongbow. That’s the life right there! Not only does he appreciate my appreciation to indulge in my appetite but we also talk sports. Not so much football because I automatically lose most of those arguments as I don’t really get into the sport that much, but when it comes to basketball, I can hang with almost anyone. Like, let’s talk sport for just a second. 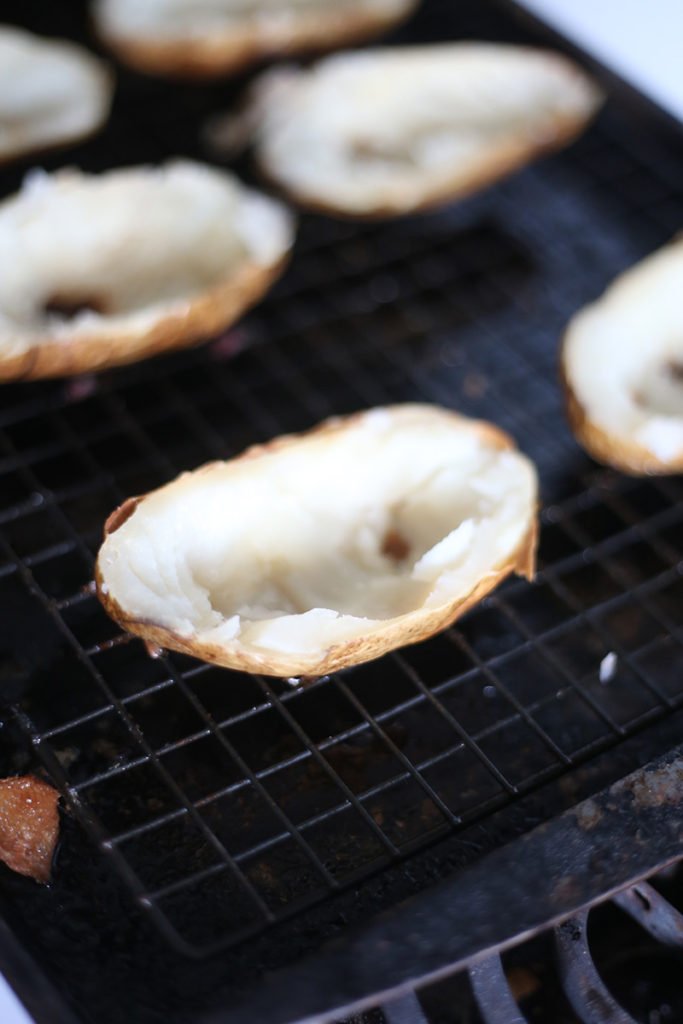 Let’s pretend you and I are at a sports bar, okay? I’m wearing some jeans and some sort of cute ladies t-shirt. A Grand-Baby Cakes shirt perhaps. No make up, diamond earring studs, and my all white Reebok Classics. We order some Buffalo and Bar-B-Q Chicken wings, Loaded Potato Skins, Sliders, Fried Pickles, and a couple of cold ones. Here is how the conversation usually goes with me when it comes to basketball:

Let’s take the issue of Kyrie Irvin being traded to the Celtics:

I don’t know why the hell Lebron had a problem with Kyrie wanting to be traded. I totally understand and would probably feel the same way if I were in his position. I mean come on, Kyrie signed a 5-year deal to stay in Cleveland, which means he would be in Cleveland after Lebron’s two-year option is over with. So, why in the hell is the Cleveland Cavaliers making all their moves to surround Lebron?! I mean, I knew when he came back to Cleveland that he wasn’t going to say. So why, why is management only making moves for someone who isn’t going to stay there long-term? At the very least, why is Lebron the only player on the team being consulted about decisions that will affect the team that he is going to leave?! Why not consider your second best player on the team and what is going to be beneficial after Lebron leaves to make sure that Cleveland doesn’t suck again?! Which is exactly what is going to happen after this upcoming basketball season. You won’t have Lebron; you traded Kyrie, and you signed crippled as Derek Rose! If Kevin Love stays in Cleveland that is all you will have he is not a star marquee player to build a team around. So yes Cleveland Cavalier fans, the Cavs will suck yet again all because of making your precious Lebron James happy. They STILL won’t beat the Golden State Warriors with that lineup. 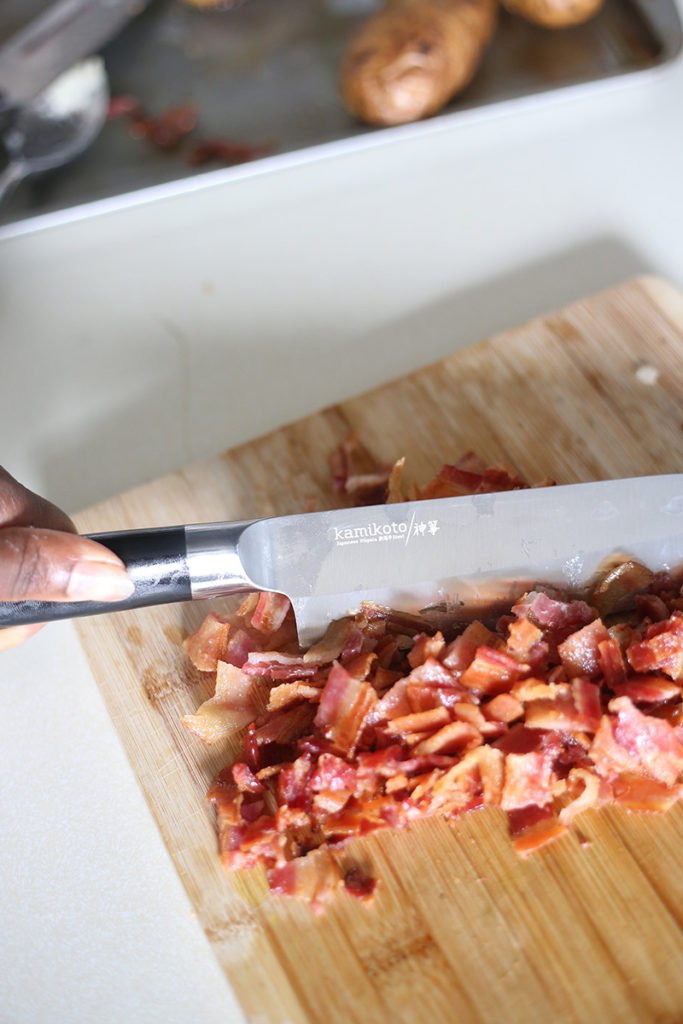 My husband LOVES when I talk dirty to him like that :-). I have not always been up to my knowledge with basketball. I have always loved the sport. I even played basketball for a year in high school, but I was way too girly for the sport. But being married to a man who loves all sports, rewinds games to study different plays, records First Take every morning, and insist on buying that stupid NFL ticket package every year, you are bound to pick up a thing or two. While he is watching his sports, I am in the kitchen making us some awesome bar food to go along with the big games, like these Loaded Potato Skins. 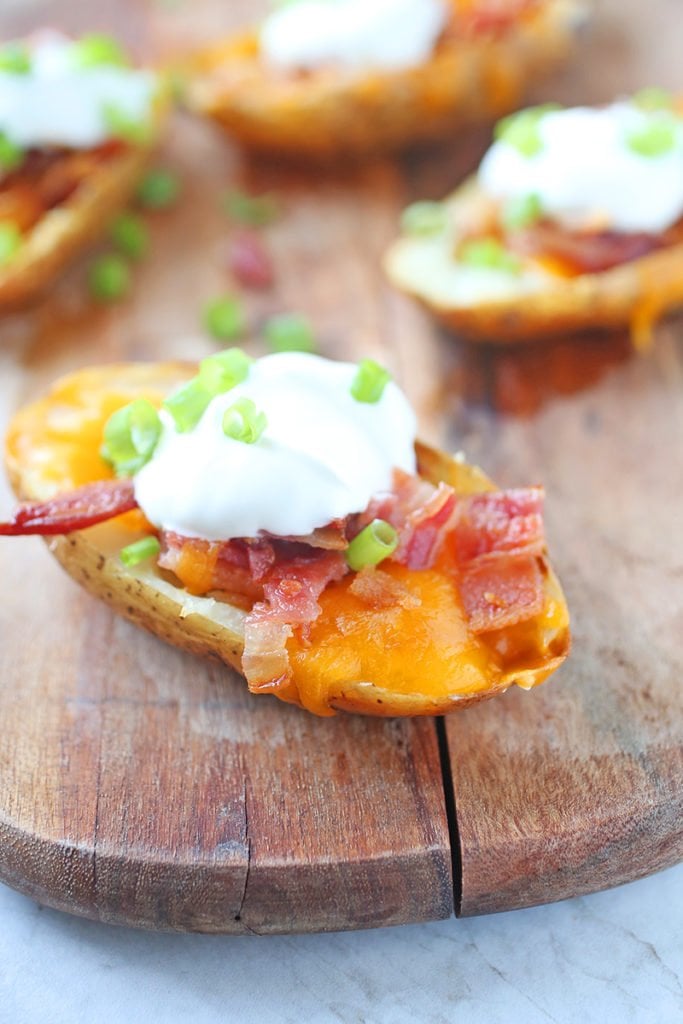 Making Loaded Potato Skins is incredibly easy. All you do is bake the potatoes, cut them in half, scoop some of the potatoes out making a little potato boat, fill the potato with cheese and bacon, bake them to melt the cheese and that’s it! I mean it is really easy. You can even use the potato that you scooped out for something else later! You can use them for mashed potatoes or Mashed Potato Cakes or something! As we approach football season and if you have a man or woman in the house who loves talking sports, you are going to need some awesome tailgate food recipes and bar food ideas! These Loaded Potato Skins definitely fit the bill.

Loaded Potato Skins baked and loaded with bacon, shredded cheese, and chives and serve with a dollop of sour cream! Perfect appetizer for the Big Game!