I cannot believe I learned how to make Vanilla Bean Macarons. 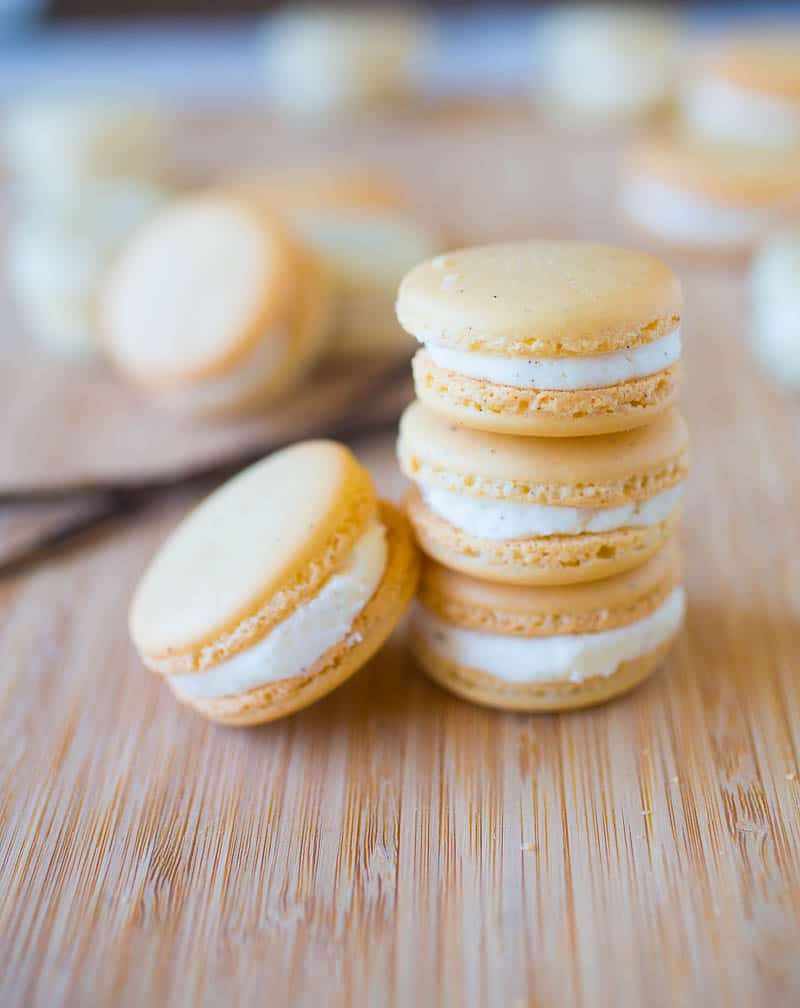 You will not believe how incredibly easy these Vanilla Bean Macarons are to make.

Okay, so let me tell you how I feel in love with macarons. I remember when I first started really noticing them on the foodie scene, which was about 5 years ago. I would see them all over the place. On food blogs, in bakeries, and even cooking shows but they would look like nothing to me. Macarons look like cute, petite, pastel colored Whoopie Pies. Like, what is the big deal?! How good can these Macaron cookies be? They aren’t gooey, they are sticky, and they hardly smell like anything! Macarons always seemed like the “Mean Girl” version of cookies. That is until recently! 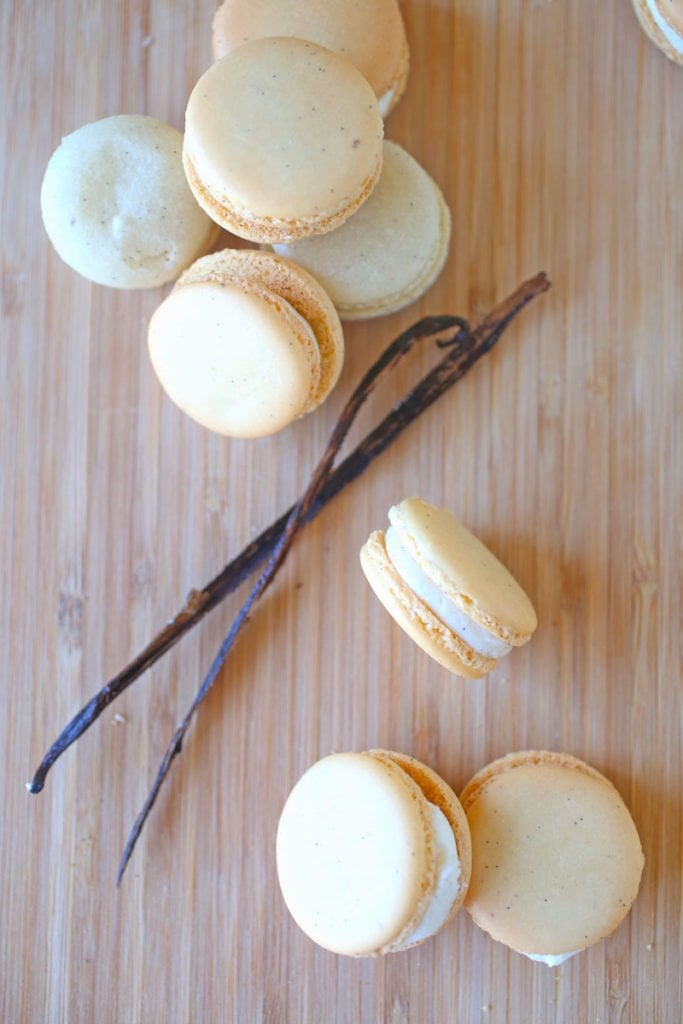 Two weeks ago, I was invited by the Ohio Poultry Association to a blogger event in Columbus, OH where I had the opportunity to learn, first-hand, how the eggs in Ohio are produced, packaged, and delivered. While attending this event and being educated on the farming industry, my new food blogger friends and I had the chance to try several dishes where eggs were the star of the show! We started off being served delicious dishes such as Turkey and Asiago Frittata, Cloud Eggs, Huevos Rancheros with Eggs, BLT Ranch Pizza with Eggs, and Homemade Custard Parfaits. If that wasn’t enough, we attended a progressive four-course meal where we attended four of the most amazing restaurants in downtown Columbus, OH.  It wasn’t until the final course, dessert, where my mindset about Macarons changed forever. 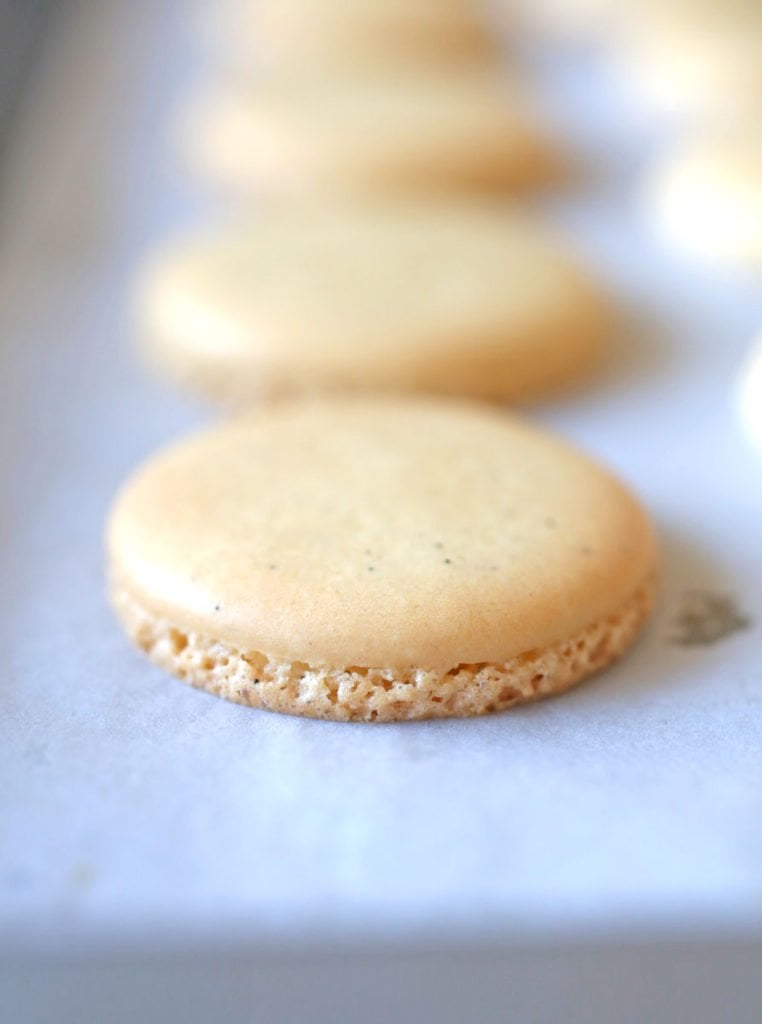 We finished our meal in a beautiful small neighborhood park in German Village in downtown Columbus, OH and there I saw a box of beautiful Macarons and my first initial thought was, “Are you serious? These things?” There was a box of Macarons from a bakery in Columbus called Pistacia Vera (if you are in Columbus and have never been there, you are missing out) and glasses of Prosecco. Through my hesitation and secretly rolling my eyes in my mind, I tried one The first Macaron I tried were Vanilla Bean Macarons. I don’t think I put into words the stupidity I felt when I tried these French cookies of how delicious they were! They look pretty but these little babies pack a mean punch of flavor and deliciousness. Oh, my goodness Macarons are AMAZING! 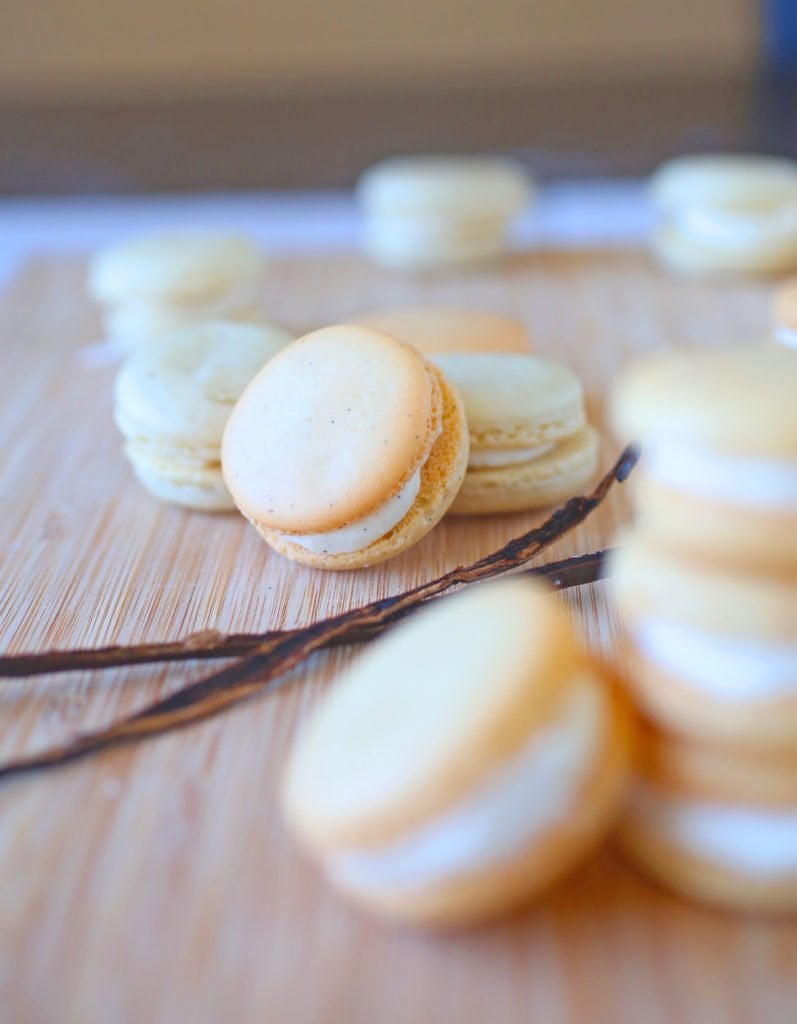 When you bite into them they are soft, slightly chewy, and, my favorite part, the slight crisp bite of the Macaron. It all works. The French have done it again! I know there is this ongoing argument amongst the most elite of foodies who are the better cooks. The Italians or the French. Although I will not be a part of that debate, I would like to take the time to thank the French for their contribution in this regard and communicate to them that I hope I made them proud in my attempt of making these Vanilla Bean Macarons.

First, let me say, it took me 4 times to make these to get them right. I don’t want to scare you because they are really not that complicated to make, nor do they take a lot of time. The reason it took me so many attempts is that I wanted to try different baking times and I don’t think I whipped my eggs whites good enough the first time I made them. So to make sure. It was really by my second attempt I had them figured out, but I wanted to be sure before I presented them to you guys and I have it figured out. 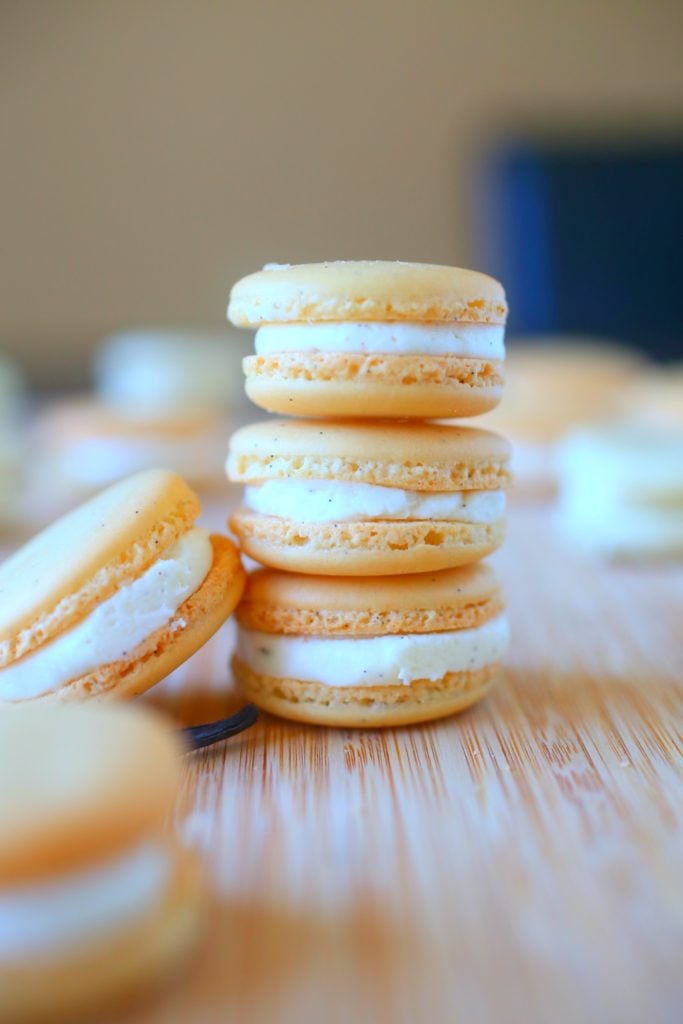 I watched a few videos on How To Make Macarons that helped me to understand different techniques and how to properly make my Vanilla Bean Macarons. There are two techniques I found. One using powdered sugar and the other using simple syrup. According to Annie Eats, she loves the simple syrup method, but I don’t find anything wrong with making macarons by sifting together the powdered sugar and almond flour. You can make your own decision about which is better. I put together a recipe video that I hope will serve as a visual aid on how to make these Vanilla Bean Macarons. But to fully understand how to make them read the recipe thoroughly. Don’t be nervous about making these Macarons. I promise it is not that difficult. Let me know they turn out, but I know they will turn out great!

These Vanilla Bean Macarons will have you melting in your seat. Full of vanilla flavor and a recipe video tutorial, these Macarons are amazing and easy!