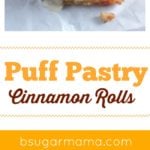 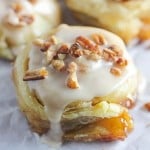 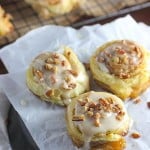 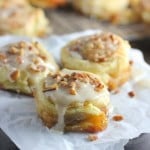 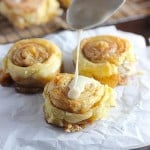 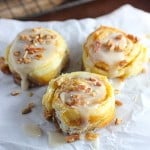 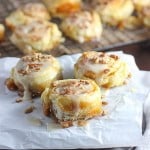 Try something different with your cinnamon rolls and use puff pastry dough instead of standard bread dough. No need to use yeast to make these easy cinnamon rolls, just use puff pastry! These Puff Pastry Cinnamon Rolls are light, buttery, and slightly crispy. They are topped with a simple maple glaze.

Puff Pastry is a wondering bread that is practically all butter with a little help flour. When it bakes it rises and becomes this light, airy, and buttery dough of goodness with layers of flaky goodness. Because there is so much butter in this recipe, you have to bake it when its cold, at least in this recipe. That is going to produce amazing flaky cinnamon rolls.

Don’t worry, in this recipe we are going to use premade puff pastry dough. But just in case you were wondering what all the “hooplah” is about when it comes to puff pastry. The answer is simple butter. More specifically, puff pastry is made with the following ingredients:

If you are feeling adventurous and want to stretch your baking abilities, try this Homemade Puff Pastry recipe from my dear old food blogger friend Allie of Baking a Moment. But for this recipe I used puff pastry sheets made by Pepperidge Farm or Pillsbury. They both have some fabulous puff pastry sheets that will give you the same result for any dish you are making with the need for puff pastry without all the work.

The next time you are planning to do something special for breakfast or brunch, try this Puff Pastry CInnamon Roll recipe. I promise it will not disappoint!

Three reasons that I can think of is the dough isnt cold enough. For this recipe, you don’t want the puff pastry to sit out at room temperature. It should still be closed when the rolls are assembled and placed in the oven. Also, make sure you continue to keep the oven door closed the entire baking time as well. Lastly, your oven isn’t reaching the high temperature it requires.

Do I need to add butter to the rolls?

No. Because there is so much butter in the pastry already, you don’t need to add butter to the filling or brush melted butter on the outside. Its’s fine the way it is. In fact, if you add butter, the cinnamon rolls may come out goopy.

If I made my own puff pastry, does it still need to be cold?

Yes. Even if you make your dough from scratch, you still want to make sure the dough is refrigerated and roll out the dough into a 9X9 square.

Enjoy this cinnamon rolls recipe that happens to made using Puff Pastry. These Puff Pastry Cinnamon Rolls are quick and easy. They are also topped with a yummy maple glaze!