“This post is sponsored by the Ohio Pork Council. All opinions are my own.”

You are going to love this Bourbon and Cinnamon Glazed Baked Ham that tastes every bit of cinnamon and with a delicious Bourbon and brown sugar crust. 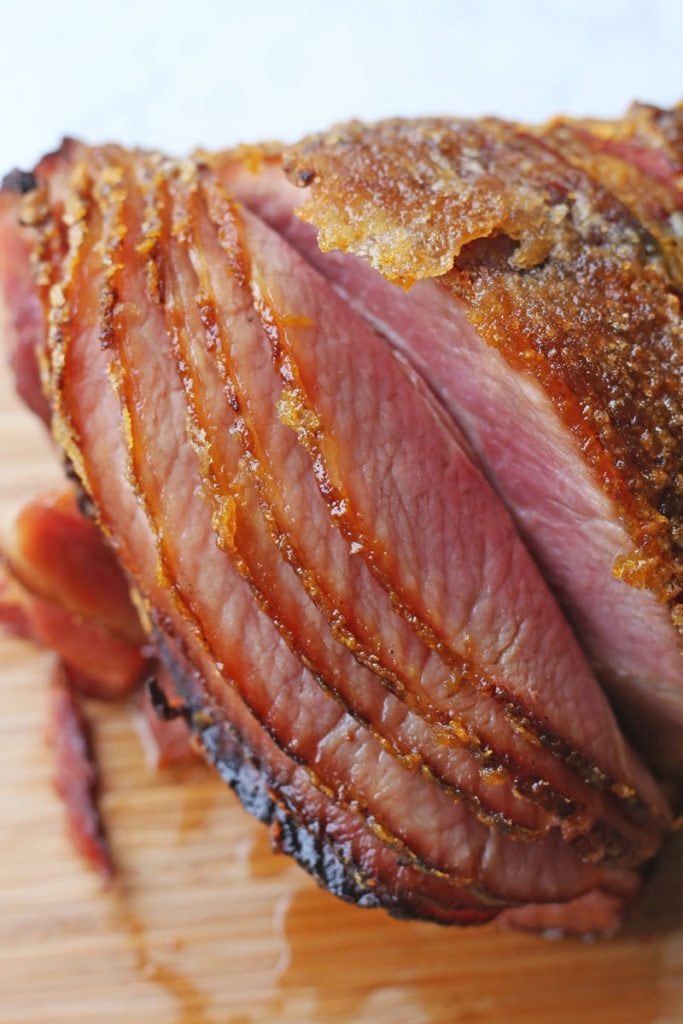 Yes! This is the third year I have done a “Thanksgiving Week” where I make Thanksgiving recipes that you can make for your Thanksgiving dinner. These recipes are also appropriate and perfect for any holiday meal. I am super excited this year because of the recipe you are drooling over currently. That is right, this Bourbon and Cinnamon Glazed Baked Ham is the very first cooked ham recipe I ever made and it came out absolutely-positively-delicious! Let me give you some context as to why me making this cooked ham recipe is such a big deal for me. 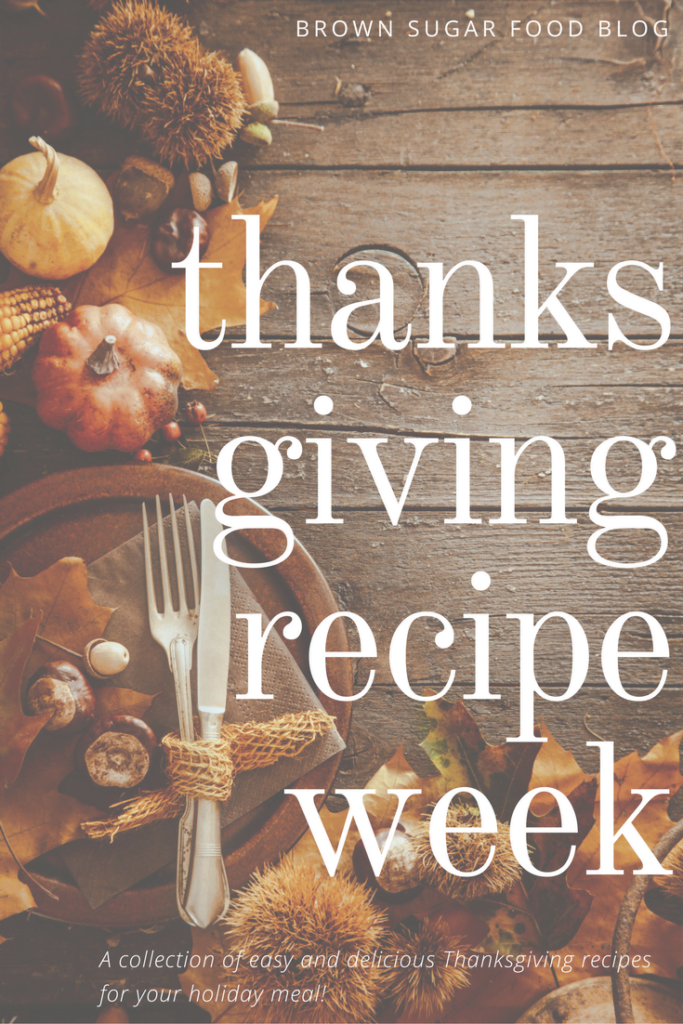 Okay, when I was younger I didn’t like ham. Yep, ham is another food that I had to grow to love. The reason why I wasn’t a big fan of ham was that of the saltiness. I am not a fan of salty foods such as bologna (gross) and hot dogs (except in this Hawaiian Hot Dogs recipes). Come to think of it, I am surprised that I like bacon. Although, I haven’t always liked pork bacon either. In any case, eating ham as a young kid was just way too much for me. However, something changed for me when I was in my teenage years. I remember it like it was yesterday, it was probably one of the best Thanksgiving dinners EVER! We had all of the traditional dishes for Thanksgiving with a few extras. I had never seen anything like it. It was amazing because our Thanksgiving meal was made by my “Na-Na”.

If you have followed me, you know her because I mentioned her in my Eggnog and Rum Bundt Cake recipe blog post. She “threw down” in the kitchen and put her foot in every last dish she made. She put her foot so far into the food she made, if you weren’t careful, you would find a toenail in your food. HA! HA! HA! Yeah, that is kind of gross, but you get my point! Everything about her food is magical and I knew she had some magic tricks up her sleeve when she made a ham that I fell in love with.

I remember when I was making my plate and she was telling us what she made and boasting about her dishes and she “Hey Nicky, try some of this ham baby!” I was always taught that it is rude to turn down food that someone offers you. So, reluctantly I tried a very small piece of the baked ham. It was love at first bite. I couldn’t believe it! It was almost as if she took the salt out of the ham. Magic! What was most impressive to me was the crust! I didn’t know that ham could have crust! It was this nice crunchy and sweet exterior, almost like candy. I was hooked. Unfortunately, I haven’t had cooked ham like that since. Well, that is until now! 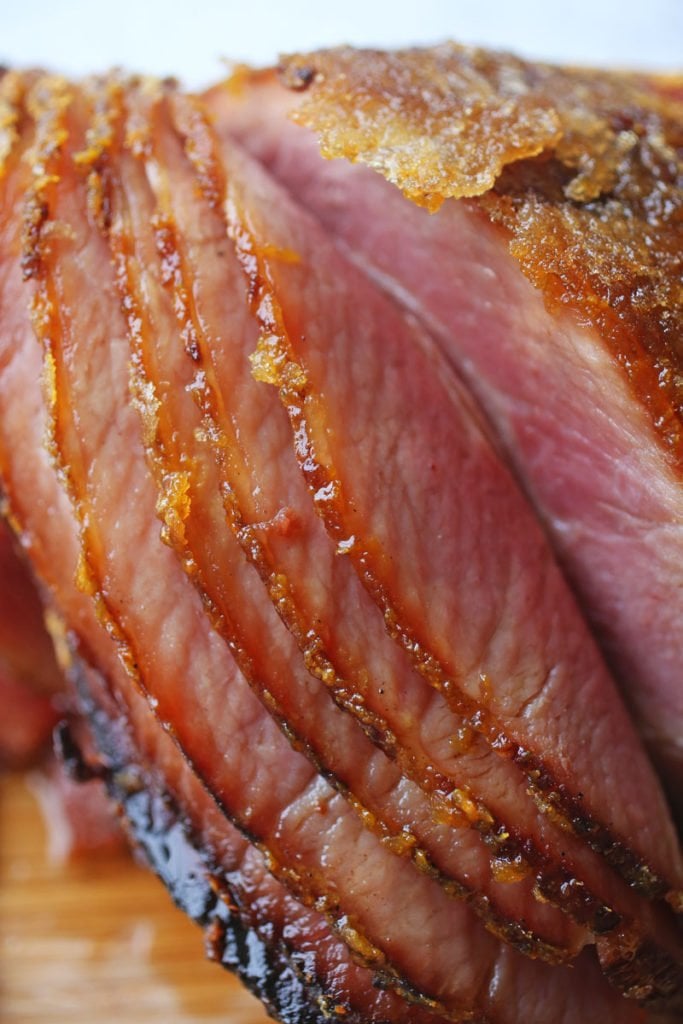 Okay, I mentioned earlier to you guys that I was really nervous about making this baked ham. I am always nervous about making something for the first time. Especially, when it’s expensive. I don’t want to mess it up. I was exploring different glazes and techniques for making baked ham to see if there were any major dos and don’ts. Here is what I learned: 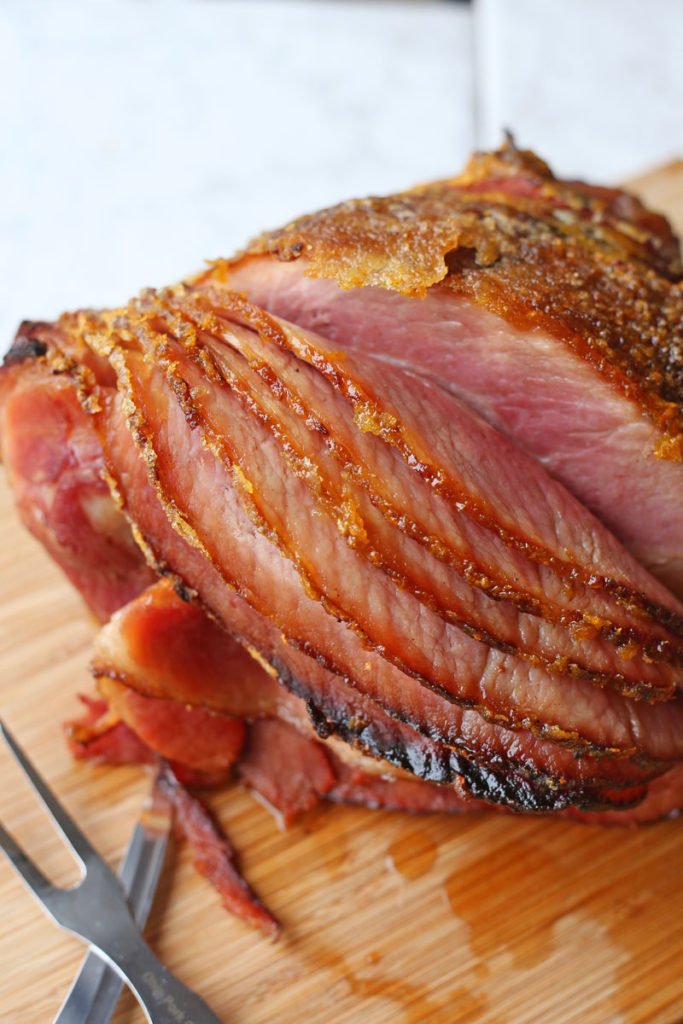 It is typical, when you see baked ham it is typically covered in pineapple. I get it! It goes along with the whole Hawaiian pork and pineapple thing. However, please get creative when you come up with your own glaze. Until you get comfortable, DO make my Bourbon and Cinnamon Glazed Baked Ham. I made a syrup out of brown sugar and Bourbon, I coated the ham with YELLOW MUSTARD ( don’t make that face) and more brown sugar and let it bake for about 2 hours. As you can see, the ham had a nice and beautiful crust made from the mustard and the brown sugar. I promise you, there is nothing to worry about when it comes to putting mustard on your ham.

I got a great tip from my step-dad (Thanks, Mojo!) about the mustard. As the ham cooks, the mustard helps that brown sugar caramelize and make the gorgeous crust you are looking at. I was super nervous about using yellow mustard, believe me. But you don’t taste the yellow mustard and you only need enough to coat the ham. The best part is basting your ham in that glaze once it is baked. Oh-my-goodness! You can taste a hint of the Bourbon and definitely the cinnamon. It is perfect! I will definitely be making this Bourbon and Cinnamon Glazed Baked Ham again for Thanksgiving!

This Bourbon and Cinnamon Glazed Baked Ham is made with brown sugar, Bourbon, and cinnamon with a surprising ingredient…yellow mustard.