I don’t know where you live but this week in Cincinnati, it’s going to be hot! I’m talking 90 degrees hot. What better way to keep things cool than eating some ice cream. Summer time is the only time that I really enjoy ice cream. However, with my lactose intolerance getting worse I am now eating ice cream made with coconut milk, which is surprisingly very good and has the same consistency as cows milk ice cream.But a girl can still indulge in mothers cows milk now and then.

Back to the hotness, so I made another amazing ice cream flavor this weekend that I think you will love. I love the nutty flavor that comes from browning butter. It add so much flavor to desserts its crazy. In addition to browned butter, I added some hazelnut brittle that I made. I think the rich and slightly smoky flavor that comes from hazelnut would go well with the browned butter. I mean you really must try this. I still had some of that salted caramel left from those Chocolate Covered and Salted Caramel potato chips so I used some of that to make sundaes. You have to really try this recipe. 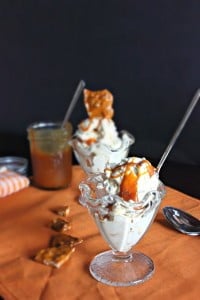