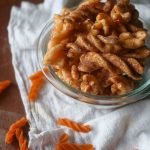 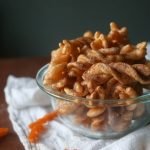 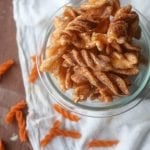 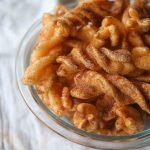 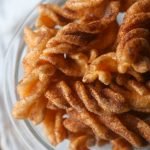 Now you can really make your Taco Tuesday into a Copycat Taco Bell Tuesday by making this super easy and delicious Cinnamon Twist Recipe. These homemade twists taste like they just came from Taco Bell.

Like many teenagers, I worked at a fast-food restaurant for my first job. Yep, my first job was working at McDonald’s. I actually didn’t mind it. I learned a lot about service and hard work and don’t regret a single painful shift. My second job, which only lasted a couple of months, was at Taco Bell. I did not enjoy my experience at Taco Bell. My boss was mean and my shift workers weren’t friendly. Nevertheless, I was amazed at how they cooked their food. I wish I could tell you some horror stories, but I got nothing for you. Nothing more than what you would probably expect.

What I was amazed by was how they made their Cinnamon Twist. What looked like simple rotini pasta going in the deep fryer, was not, well, that simple. I love Cinnamon Twist from Taco Bell. No matter what I ordered, I always got a bag of those wonderful twists. Because I thought working at Taco Bell gave me some secret insight into how to make them, for years I tried to make them at home.

I was told that the Cinnamon Twists at Taco Bell is nothing more than deep-fried pasta that puffs up when it’s cooked. Do you know how many times I wasted rotini pasta frying them thinking that each time was going to be the time it worked out? I even thought cooking the pasta and then frying it would give me what I was looking for but that didn’t make much sense either. So, it is true that to make these cinnamon twists from scratch you fry pasta. That’s it! The difference comes with the type of pasta you fry and that is what I am going to educate you on now.

How Taco Bell Cinnamon Twist are made

As mentioned the difference in making these twists comes from the type of pasta you fry. For this recipe, you will need a pasta called “Duritos Pellets Wheat Twists”. This is a Mexican wheat pasta that puffs up when you fry it. It doesn’t take long to cook either. As soon as it hits the hot oil, it immediately puffs up and forms into the gorgeous Cinnamon Twists that we’ve all come to know and love.

After they’ve cooked, you immediately remove them from the oil and sprinkle in a coating of cinnamon and sugar. You can also sprinkle them in popcorn cheese flavoring, ranch flavoring, or seasoned salt and hot sauce (for the culture). Since I’ve come to know of this pasta and its capabilities, I’ve learned the many ways people turn them into their own favorite snacks.

Now that you have a copycat version of Taco Bell’s Cinnamon Twist recipe, you are now ready to have homemade Taco Bell night! Here are some additional recipes:

Now you can make Taco Bell’s Cinnamon Twist recipe at home! You only need two simple ingredients to bring this infamous snack to life!