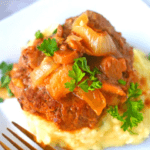 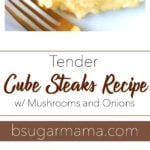 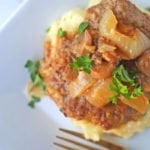 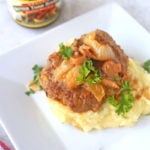 This post was sponsored by Better Than Bouillon as part of an Influencer Activation for Influence Central and all opinions expressed in my post are my own.

This Tender Cube Steak recipe with Mushrooms and Onions is an economical and delicious meal that is best served over a bed of pillowy mashed potatoes. Use Better Than Bouillon to add flavor to the gravy and for a savory beefy flavor.

Sunday Dinners were an important tradition in my house growing up. On Sundays, my mom would make Homemade Fried Chicken, Pot Roast, Roasted Chicken, or anything that was hearty and savory. She also added some hearty side dishes like Homemade Baked Macaroni and Cheese, Green Beans and Bacon, or Southern Collard Greens. Another meal I should add to the list is Cube Steaks. My mom would make some of the most delicious and tender Cubed Steaks in a rich gravy, smothered in onions and mushrooms. Oh my goodness, just typing this out is making me hungry.

When I started cooking, I couldn’t wait to make Cubed Steaks, just the way my mom made them. The only problem is, they would never come out as tender as hers. I tried everything I knew my mom did in order to get those Cubed Steaks to break down to a “melt-in-your-mouth” consistency. I tried letting them simmer in the gravy for several minutes and I even used a meat tenderizer (not sure if it works) to try to get those steaks tender, but they always came out a little tough. So I figured out a way to make my Tender Cube Steak Recipe not only tender but filled with flavor using Better Than Bouillon.

How to make Cube Steak Tender

I was watching some show on the Food Network ( Chopped I think) and one of the ingredients the contestant had to use was liver. A technique that the contestants implemented was soaking the liver in milk to make it more tender and remove any remaining toxins. I decided to try that same process. Therefore, I marinated my Cubed Steaks in buttermilk for, at least an hour.

Once I was ready to cook the Cube Steaks, I remove the steaks from the milk, seasoned on both sides with salt and pepper, dredged them in flour, and pan-fry them in a heavy-duty large skillet. Once they were browned on both sides, I proceeded to make the gravy.

How to make gravy for this Cube Steak Recipe

Using the same pan, I cooked some onions and mushrooms until they were tender. I added some water, or you can use beef broth, and Better Than Bouillon Beef flavoring returned the Cubed Steaks to the pan, and allow them to simmer for 30-45 minutes. Talk about tender!

The flour that was used to coat the cubed steaks makes the gravy thick along with a teaspoon of cornstarch. I served my Cubed Steaks over mashed potatoes and my family was happy!

I loved using Better Than Bouillon because of how concentrated the flavor is. You only need a little bit of the flavoring to expand the flavors of your dish! Unlike other flavor bases, Better Than Bouillon is not a powder that leaves a gritty aftertaste. It is a liquid that immediately dissolves in your food. You can use their flavor bases in not only gravy, but vegetables, soups, and even burgers! Get creative!

What cut of beef is used to make cubed steaks?

Usually, cubed steaks are made from top sirloin. It is then rolled with a meat tenderizer, which is how the indentions are made within the steaks.

How do you soften cubed steaks?

I soak my cubed steaks in buttermilk for, at least, one hour. This typically helps with the tenderizing of the beef.

What can I use to season the gravy if I don’t have access to Better Than Bouillon (BTB)?

If you don’t have access to BTB, you can use beef broth instead of water and onion soup mix for flavoring. The soup mix is a perfect combination of all of the flavors you would want in a gravy.

These Tender Cube Steaks with Mushroom and Onions is a delicious comfort meal that will satisfy any family for dinner! Just serve with mashed potatoes.