This Easy Apple Crisp Recipe is an easy, delicious, and rustic dessert for any occasion or day of the week. 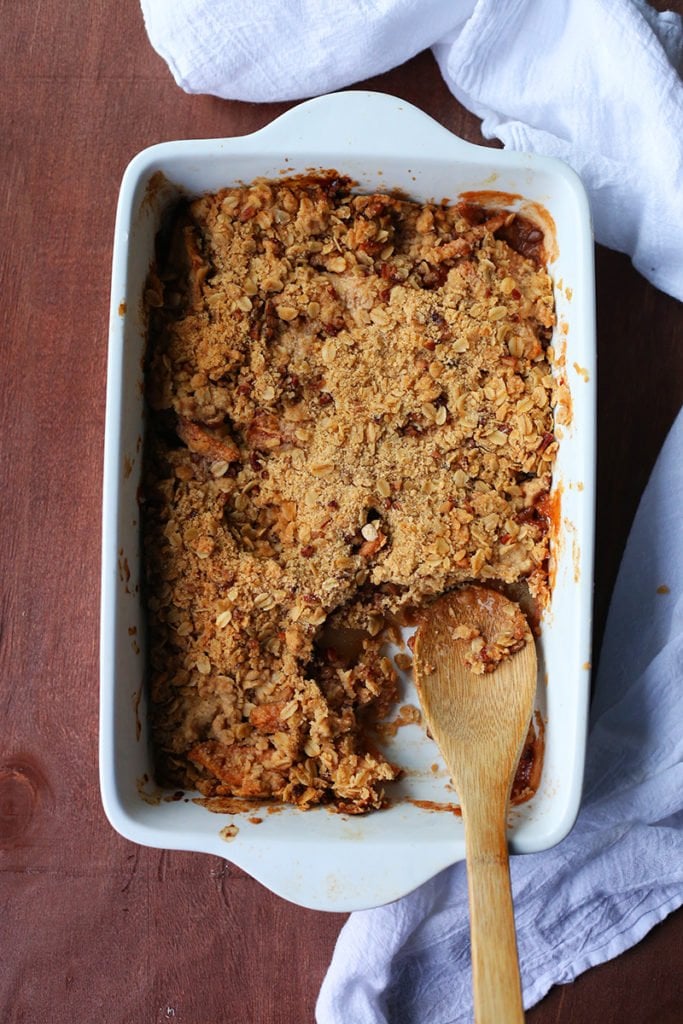 Enjoy this Easy Apple Crisp Recipe with a dollop of vanilla ice cream any day of the week.

Okay, let’s see, so there is pie, cobbler, and crisps. Hmmm, the all almost seem similar don’t they. Well let’s walk this through, pie has crust on the top and bottom; cobbler doesn’t have crust on the bottom and it’s typically made in a pan versus a pie dish; and crisps are…well…crisps are cobblers made with a non-traditional pie crust that usually consists of flour, oats, and sugar. That about sums it all up, right? I wonder where these three desserts came from? Were they accidents like Chocolate Chip Cookies or French Dip Sandwiches (Oh yeah, both of these wonderful delicacies were accidents. Look it up!). Perhaps these desserts were meant for special occasions in other parts of the world that was brought to America? I don’t know but I took the liberty to find out more about the background of these desserts from a trusted and very reliable source…WIKIPEDIA! Let’s see what “Wiki” has to say. 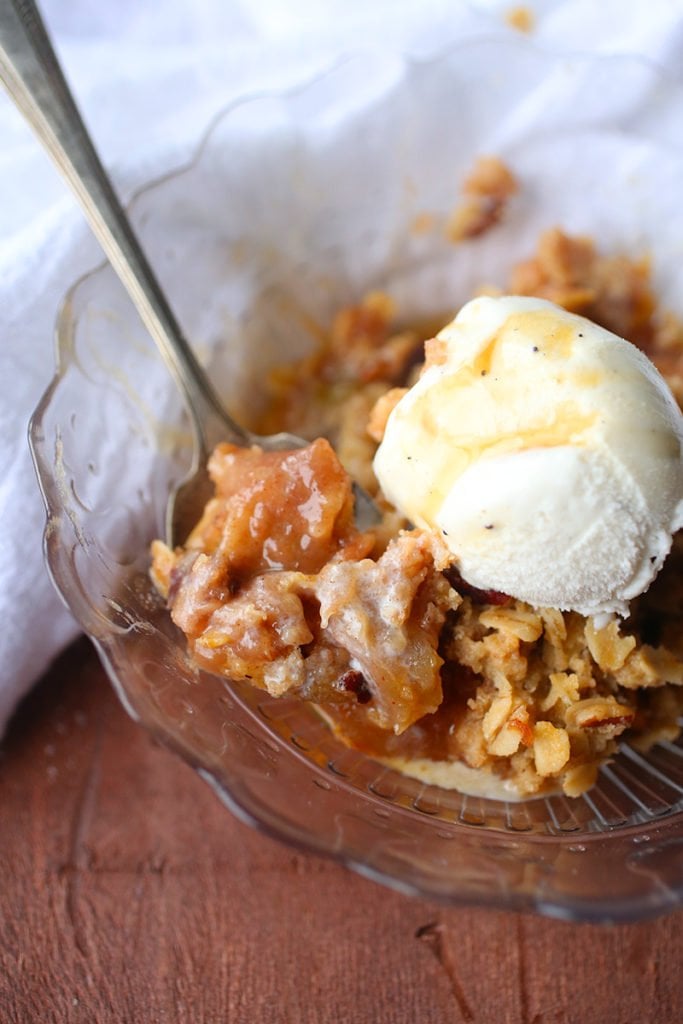 When long journeys were taken by sea or foot, often a butcher or cook would tag along to prepare meals. Well, having an extra body took up extra space that could’ve been used for more important supplies and other cargo. Different origins started to take food that would take less space and still feed the pact. For example, Egyptians would take a flatbread called dhoura cake and the British would take biscuits! It was the Egyptians who really were the firsts to create the concept of pie making crusts from wheat, oats, rye, and barley and fill them with the fruit and meat that was available to them. However, the Ancient Greeks were the ones who discovered adding flour and butter together to make a delicious flaky crust. Pies continued to develop from the Ancient Greeks discovery by other countries and regions such as the Rome and other European countries.

Cobblers originated from British American colonies. The early English settlers were not able to make puddings and other traditional desserts due to the lack of supplies. So, they put their fruit in a dish and covered it with uncooked biscuits or dumplings. In fact, cobbler means “wooden bowl”. That makes perfect sense to me as I imagine the fruit being prepped in a wooden bowl as well as the biscuits being molded in that bowl as well. However, it was us Americans who made cobbler into a sweet dessert.

Crisps, such as Apple Crisp, is a relatively modern recipe that was not established until the early 1900’s; whereas pies and cobblers were created in the 1800’s. Apple Crisp was the first of its kind featured in a cookbook “Everybody’s Cookbook: A Comprehensive Manual of Home Cookery”. Apple Crisp became an American and British favorite dessert during the fall when there are usually a lot of apples. It is also popular in Canada as well. 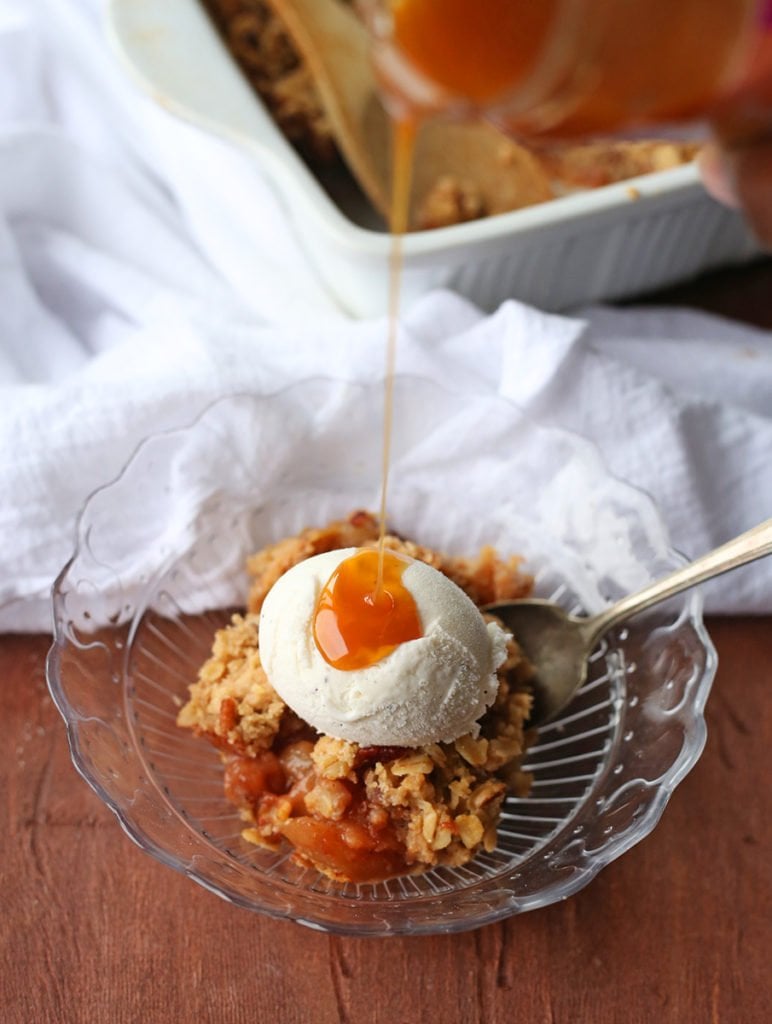 There you have it, folks! Although these three desserts are different in presentation, they all have a story that precedes most of us but is still relevant and current favorites centuries later! So thank you Egyptians, Britians, and Americans for having your hands in these desserts that make our hearts and bellies happy! 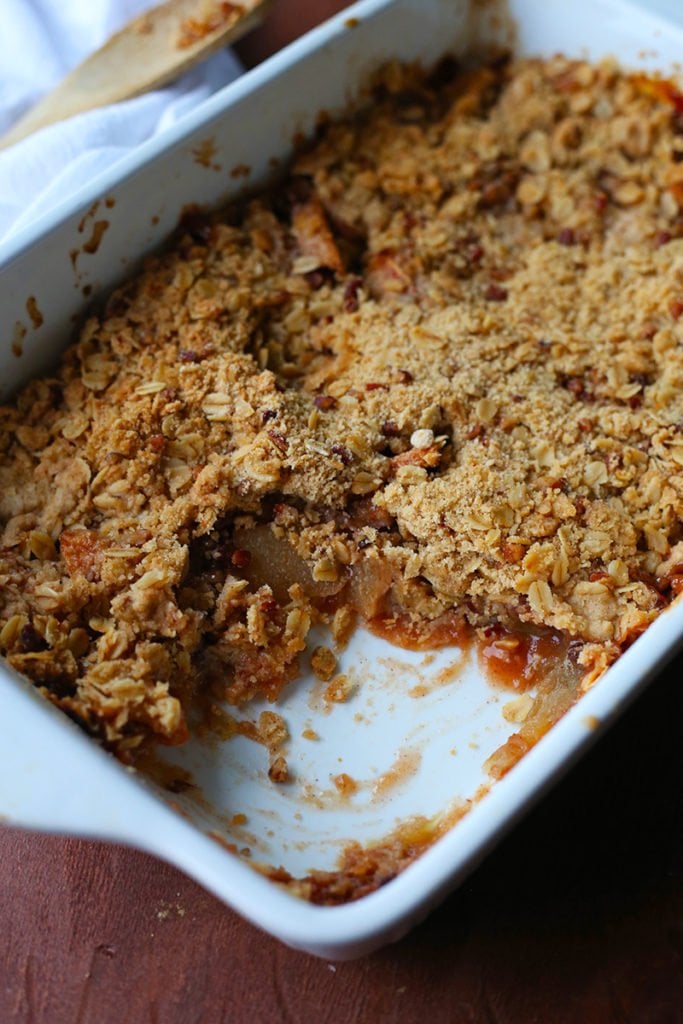 On my blog, I have made pies and cobblers. I have made Deep Dish Apple Pie that is amazing, and I have made Peach Cobbler before! Both of which are delicious and amazing, but I have never made an Apple Crisp before. It is true, there are so many apples out there to harvest right now that we don’t know what to do with them all. There are so many apple recipes in the world too but I love Apple Crisp because it’s easy, delicious, and rustic. I imagine this Easy Apple Crisp Recipe would be so awesome to make any day of the week if you are looking for a quick and easy dessert to put together for your family. Really, you just slice your apples and toss in some sugar and cinnamon, and blend some oats, flour, and sugar together for the topping. There is nothing fancy about this Easy Apple Crisp Recipe other than the fact that it is just really good and comforting to end any comforting hearty dinner afterward. This Apple Crisp recipe is the most delicious only minutes out of the oven and served with ice cream. Guess what? I am sure that you have most of the ingredients to this dish already. 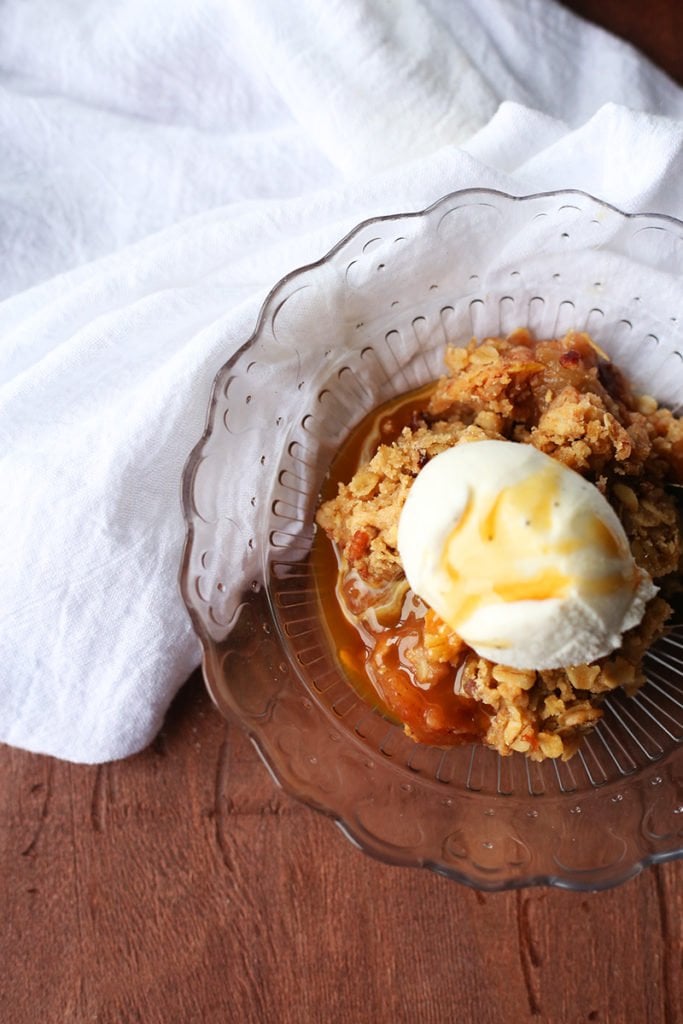 When its apple season you need an easy apple recipe to make! Try this Easy Apple Crisp Recipe that is delicious! Serve with ice cream!