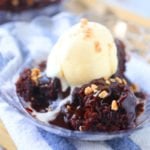 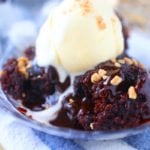 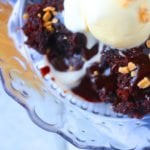 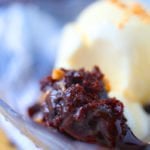 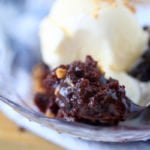 This Easy Brownie Cobbler Recipe is like chocolate heaven in a bowl. Who wouldn’t love an ooey-gooey chocolate fudgy bowl of brownie topped with vanilla ice cream with a fudgy bottom?

Okay, so the first time I saw or heard of there being such a thing as Chocolate Cobbler or Brownie Cobbler, I made a look of disgust. Not that I don’t like chocolate or anything, but because the idea of someone making a bowl of chocolate seemed a bit…lazy. I mean I am used to cobblers having fruit and a buttery crust like my Peach Cobbler recipe. Not to be a big goop of chocolate with crust on top.

It kind of came across as one of those dishes where it was so unhealthy looking that it was actually ridiculous to think of this being a dessert. Do you know what I mean? Think of dishes like Double Burger with bacon, pancetta, three types of cheese, macaroni and cheese, and a fried egg or a Fried Oreo Chocolate Brownie sundae. Now, do you see what I mean? Food that sounds good in theory, but the idea of consumption is absolutely ridiculous! That is how I thought of Chocolate and Brownie Cobbler. That was until I decided to make the incredibly delicious chocolate dessert and give it a try.

How to make Brownie Cobbler

Here is how my Brownie Cobbler recipe is a bit different from most. I took a massive shortcut and used a brownie box mix. I added some extra butter and water to give the cobbler that gooey texture that you are looking for.

So, I had a jar of hot fudge sauce and poured it over and it was insane. This baked Brownie Cobbler was super soft and moist and that hot fudge sauce just gives the cobbler added moisture and chocolatey-goodness! I mean, this cobbler is perfect for chocolate lovers and goes really well with my Homemade Vanilla Bean Ice Cream.

Toppings for the Brownie Cobbler

To make the cobbler more special, you can lay out some additional toppings for people to add more layers and make a brownie sundae. Here are some of the toppings you can include:

Commonly Asked Questions about this recipe

Can I make this Brownie Cobbler in a slow cooker?

Yes. You can cook on low for six hour or high for 3-4 hours.

Can I make this dessert the night before?

Yes! I recommend heating it back up on low so it does not bake through. You can add a little more hot fudge if it come out a little dry.

Can I add chocolate chips to this recipe?

Yes! You can about a fourth cup of chocolate chips in with the batter and it will melt through!

Items you may need for this recipe 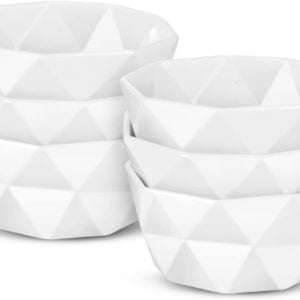 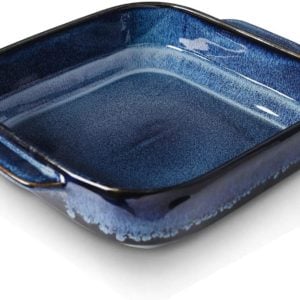 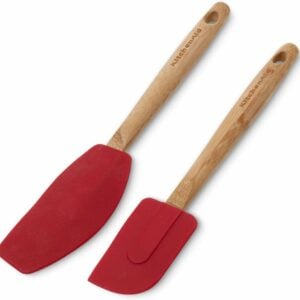 This Easy Brownie Cobbler Recipe is perfect for the chocolate lovers! This cobbler is made using brownie mix and is super delicious and amazing! Serve with a dollop of ice cream!